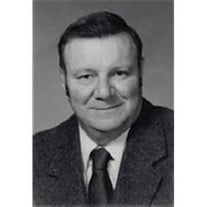 Max B. Taylor, 84, of Clarion, died Saturday, February 23, 2013, at his home. Born October 19, 1928 in Smicksburg; he was the son of the late Thomas M. and Grace L. Lewis Taylor. He was married on November 27, 1951 to the former Donna Smith, and she survives. A veteran, Max served in the Marines from August 1946 to March 1948 and the Army 82nd Airborne from April 1950 to April 1953. He worked for Bell Telephone for 37 years. Max was a member of the First United Methodist Church in Clarion. He was also a member of the Masonic Lodge 277 of Clarion, Coudersport Consistory, Clarion County Shrine, American Legion Post 66, VFW Post 2145, Moose Lodge 101, Fraternal Order of the Eagles 3807, and Plumville Hunting Camp. Max enjoyed hunting, collecting coins, golf, and was well known in the Clarion area as a cheese distributor.  He enjoyed watching NASCAR and visiting the local race tracks. In addition to his wife, he is survived by four children, Vera Philson and her husband, David, of  Mercer, and their children, Jennifer Philson, Dr. Vanessa (Mike), and Donna Philson; Jeffrey Taylor and his wife, Sherry, of Fairmount City, and their children, Jeanne (Mike) Glavich and Ian Taylor; Patricia Childers and her husband, Eddie, of South Dakota, and their daughter, Hannah and Caleb Taylor and great-granddaughter, Emma; and Tracy Taylor and his wife, Jodi, of Chillicothe, OH, and their children, Zachary, Melissa, and Zane Taylor. Also surviving are two sisters, Jane Jacoby and Bonnie Smith of Indiana, PA; and a sister-in-law, Jane Taylor of North Carolina. He was preceded in death by his parents; a brother, Dale Taylor; and a grandson, Jesse Taylor. At Max’s request, there will be no visitation.  Services will be private. Memorials and donations can be made to a charity of one’s choice.

The family of Max B. Taylor created this Life Tributes page to make it easy to share your memories.

Send flowers to the Taylor family.