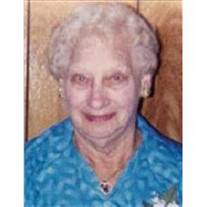 Mildred Johnson, 89, of Stone House Road, Clarion, passed away Tuesday, April 14, 2009, at the Golden-Living in Clarion.   Born June 13, 1919, in Clarion Township, she was the daughter of Harry Spare and Ethel Beatrice Noerr Cummings.   She was married May 16, 1939 to Alfred Dallas Johnson, who survives.   Mrs. Johnson was a homemaker.   She attended the Christian Missionary Alliance Church in Clarion.   Mrs. Johnson enjoyed quilting, gardening, and spending time with her children, grandchildren, and great grandchildren.   In addition to her husband, she is survived by a daughter, Aldean Dehner of Strattanville; a son, Larry Johnson and wife, Barbara, of Clarion; five grandchildren, Cheryl L. Brosius of Strattanville; Terry R. Dehner Jr. of Katy, TX; Katherine M. Dehner of Tionesta; Tammy M. Himes of Emlenton; and Tracy M. McGinnis of Strattanville; and 14 great grandchildren.   She is also survived by a sister, Mary Dills of Clarion; and brother, Edgar Cummings of New York.   In addition to her parents, she was preceded in death by a sister, Alda Dwyer; brother, Wilber Cummings; and son-in-law, Terry Dehner Sr.   Family will receive friends from 7 to 9 p.m. on Thursday, April 16, 2009, at the Robert V. Burns Funeral Home in Clarion and from 10 to 11 a.m. on Friday, April 17, 2009, at the New Rehoboth Greenville Presbyterian Church in Clarion.   Funeral services will be held at 11 a.m. on Friday, April 17, 2009, at the New Rehoboth Greenville Presbyterian Church in Clarion with the Rev. James Dietrich, pastor, officiating.   Interment will be held in the New Rehoboth Greenville Presbyterian Church Cemetery.   Family requests that donations and memorials be made to the New Rehoboth Greenville Presbyterian Church in Clarion.

The family of Mildred Johnson created this Life Tributes page to make it easy to share your memories.

Send flowers to the Johnson family.