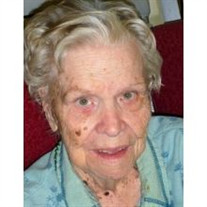 Mildred L. Pappas, 89, of Shippenville, passed away Tuesday, April 4, 2017 at the Shippenville Healthcare Center. She was born on September 24, 1927 in Butler; daughter of the late Calvin “Bunny” and Alice VanBuren Bowser. Mildred was married on November 16, 1946 to Theodore G. Pappas, Jr., and he preceded her in death. She was a homemaker. Mildred enjoyed the company of people, especially her family. She is survived by two sons, Ted G. Pappas III and his wife Linda of Miola and Doug L. Pappas of Sheffield, one daughter, Dianne Birckbichler and her husband Mike of New Castle, four grandchildren, and ten great grandchildren. Mildred is also survived by two brothers, Ron Bowser and his wife Elaine and Calvin “Champ” Bowser and his wife Betty, one sister, Georgia K. Colosimo, a sister-in-law, Delores Bowser all of Butler, and a brother-in-law, Mickey Pappas and his wife Jean of Mars. She was preceded in death by her parents, husband, a brother, Rudy and five sisters, Nancy, Peggy, Helen, Ginny, and Phyllis. The Robert V. Burns Funeral Home in Clarion is handling the arrangements. There will be a Graveside Service at the Butler County Memorial Park Cemetery at 1 p.m. on Friday, April 7, 2017 at the Mausoleum. Memorials or donations can be made in Mildred’s name to the North Clarion School Foundation, 10439 Route 36, Tionesta, PA 16353, Attention: Barb Beveridge.

Mildred L. Pappas, 89, of Shippenville, passed away Tuesday, April 4, 2017 at the Shippenville Healthcare Center. She was born on September 24, 1927 in Butler; daughter of the late Calvin &#8220;Bunny&#8221; and Alice VanBuren Bowser. Mildred... View Obituary & Service Information

The family of Mildred L. Pappas created this Life Tributes page to make it easy to share your memories.

Send flowers to the Pappas family.