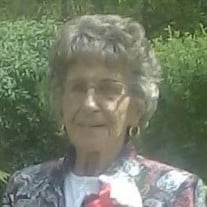 Nancy Lee Campbell, 83, of Clarion, passed away Saturday morning, September 8, 2018 at the Clarion Hospital. She was born on January 1, 1935 in Fisher; daughter of the late C. Russell and M. Thelma Ion Wilcox. Nancy graduated from Clarion Limestone High School. She was married in July of 1956 to Billy Joe Campbell, whom preceded her in death on July 8, 1996. Nancy first worked at Sylvania in Brookville, and retired from Riverside/Bilo after 35 years of service. She was a 50 year plus member of the First Presbyterian Church of Clarion. Nancy was also a member of the Early Risers at the Clarion County YMCA. She loved going to the Fisher Homecoming every year. Nancy is survived by a son, Michael P. Campbell and his wife Janie of Shippenville, a daughter, Brenda Lee Campbell of Arizona, two grandchildren, Melissa Pierce and her husband Jeff and Christopher Campbell and his fiancé, Abby, two step grandchildren, Ross Sandora and his wife Liz and Emily Gasior and her husband Jason, two great grandchildren, Brandon and Jenna Pierce, and one step great grandson, Harrison Sandora. She is also survived by two sisters, Marge Gruber of Florida and Janet Wonderling of Cranberry Twp., a special sister-in-law, Lou Ellen Taylor, three special nieces, Connie Taylor, Lana Renfro, and Pat Looney all of Tennessee, and several other nieces and nephews. Nancy was preceded in death by her parents, husband, a half-brother, Keith Ion, several nephews, and a niece. At Nancy’s request, there will be no public visitation or services. Burial will be held at the Cedarview Memorial Park in Strattanville and a Graveside Service will be held at a later date. The Robert V. Burns Funeral Home in Clarion is handling the arrangements. In Lieu of flowers, donations can be made to the Clarion YMCA, 15952 Route 322 #1, Clarion, PA 16214.

The family of Nancy L. Campbell created this Life Tributes page to make it easy to share your memories.

Send flowers to the Campbell family.