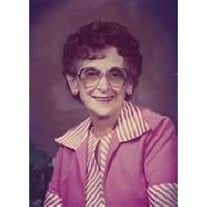 Naomi Pearl Gustwick, 99, of Strattanville, died Wednesday morning, May 1, 2013, at the Clarion Hospital. Born January 25, 1914 in Milroy, Mifflin County; she was the daughter of Edward and Mary J. Freed Baumgardner. Naomi was married on April 29, 1932 to Walter S. Gustwick, who preceded her in death on August 18, 1961. She was a homemaker.  Naomi loved knitting, sewing, cooking, and watching soap operas.  She also enjoyed reading; from the age of 18, she has read hundreds of mystery novels.  She also enjoyed spending time with her family, grandchildren, and great grandchildren.  She especially enjoyed many Country Trails bus trips with her daughter, Dana.  She loved her two beloved cats, Katy and Deanna. After the death of her husband, she went to work at the Clarion Hospital as an aide and worked there for 21 years.  She was a member of the Strattanville United Methodist Church. Naomi was also a former member of the Rebeccas. She is survived by two daughters, Dana Reitz and her husband, Jim, of Strattanville, and Virginia Bennett and her husband, Ron, of Elkhart, IN; five grandchildren, Richard “Dick” Clark and his wife, Carol, of Shippenville, Laurie Miller and her husband, Michael, of Pittsburgh, Melissa McNutt of Clarion, David Bennett and his wife, Kim, of Indiana, and Stanley Bennett and his wife, Jan, of Auburn; thirteen great grandchildren, including Rachel, Sarah, and Will Clark of Shippenville; and five great great grandchildren. In addition to her parents and husband, she was preceded in death by two daughters, Georgianna McNutt and Geraldine Lander; a son-in-law, Richard E. Clark; and a granddaughter, Wendy Bennett. Family will receive friends from 1 to 4 p.m. on Sunday, May 5, 2013, at the Robert V. Burns Funeral Home, 638 Wood Street, Clarion. Funeral services will be held at 11 a.m. on Monday, May 6, 2013, in the funeral home with Rev. Nancy Zahn, pastor of the Strattanville United Methodist Church, officiating. Interment will be held in the Asbury Cemetery in Strattanville.

Naomi Pearl Gustwick, 99, of Strattanville, died Wednesday morning, May 1, 2013, at the Clarion Hospital. Born January 25, 1914 in Milroy, Mifflin County; she was the daughter of Edward and Mary J. Freed Baumgardner. Naomi was married on April... View Obituary & Service Information

The family of Naomi Pearl Gustwick created this Life Tributes page to make it easy to share your memories.

Send flowers to the Gustwick family.