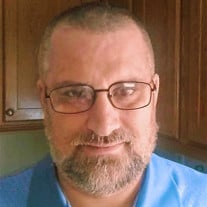 Nathan P. Ochs, 42, of Summerville, SC, formerly of Lucinda, passed away unexpectedly on Friday, January 24, 2020 at his home. He was born on November 9, 1977 in Clarion; son of Gerard M. “Bird” Ochs of Lucinda and the late Diane M. Zacherl Ochs. Nate married the former Brenda Shanafelt; whom survives. He worked at OL Thompson Equipment for over five years as a General Laborer in South Charleston, SC. Nate was a Pittsburgh Steelers and Penguins fan his entire life and enjoyed the great outdoors: hunting, fishing and boating. He is survived by his loving wife: Brenda Ochs and their son: Cory Ochs of Summerville, SC; his father: Gerard; three brothers: Scott A. Ochs and his friend, Bonnie McVay, of Lucinda, Chad E. Ochs and his girlfriend, Kelley J. Richwine, of Camp Hill, and Casey G. Ochs of Tidioute; and a sister: Katrina L. Beham her husband, Frank, and their two children Raelyn C. and Trace W. Beham of East Brady. He was preceded in death by his mother and his grandparents: David J. and Catherine M. Loll Zacherl. A Memorial Service will be held at the Robert V. Burns Funeral Home in Clarion on Saturday, February 8, 2020 at 11 a.m. with Rev. Joseph Czarkowski, pastor of the Saint Joseph Catholic Church in Lucinda. Interment will take place in the Saint Joseph Catholic Cemetery. In lieu of flowers, Donations may be made to the Clarion Cancer Center at the Clarion Hospital in Nathan’s name in loving memory of Diane M. Ochs, 150 Doctor’s Lane, Clarion, PA 16214.

The family of Nathan P. Ochs created this Life Tributes page to make it easy to share your memories.

Send flowers to the Ochs family.