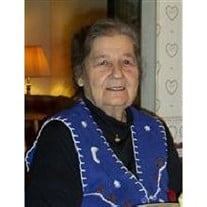 Nellie Leona (McCauley) Kirkpatrick, 89, formerly of New Bethlehem and East Brady, passed away on Friday, December 31, 2010, at the Clarview Nursing Home in Sligo. She was born on August 24, 1921, in Porter Township, to the late Charles A. and Olive Melzer McCauley. She graduated from Porter Township High School. She was married on July 8, 1941, to Paul C. Kirkpatrick, who preceded her in death on March 20, 1981. Paul and Nellie spent most of their lives on a dairy farm in Porter Township and were active members of the community.  She was a member of the Leatherwood Church.  Nellie enjoyed driving her car, camping, and traveling.  Her hobbies were quilting, reading, calligraphy, and writing poetry.  She attended the dulcimer festival at Cook Forest for many years.  Nellie led a full life with the mantra “it may not be the easy way but it will be my way”. She is affectionately called “Grandma Nellie” by all who knew her. Nellie is survived by her children, Gary D. Kirkpatrick and his wife, Kathy, of New Bethlehem, Lyle C. Kirkpatrick and his wife, Marie, of Rimersburg, Karen Travis and her husband, Denny, of Apollo, Rex W. Kirkpatrick and his wife, Ruth, of Colorado Springs, Mark L. Kirkpatrick and his wife, Darla, of Summerville, and extended family member Robert A. Hile and his wife, Vonnie, of Fredonia.  Nellie was the proud matriarch of 14 grandchildren, 26 great grandchildren, and one great, great grandchild. Nellie’s surviving siblings are Charles McCauley and his wife, Romaine, of New Bethlehem, Elmer McCauley and his wife, June, of New Bethlehem, Caroline White of Punxsutawney, and her brother-in-law, Robert Himes of Summerville. In addition to her parents and husband, she was also preceded in death by her brothers, William and Eugene McCauley, and her sister, Cynthia Himes. As Nellie requested, there will be no visitation.  A memorial service will be held at 11 a.m. on Saturday, April 30, 2011, at the Leatherwood Church in New Bethlehem. Interment will be held in the Cedarview Memorial Park in Strattanville. The family wishes to extend a special thanks to the community for their compassion and support in Nellie’s later years.  God Bless.

Nellie Leona (McCauley) Kirkpatrick, 89, formerly of New Bethlehem and East Brady, passed away on Friday, December 31, 2010, at the Clarview Nursing Home in Sligo. She was born on August 24, 1921, in Porter Township, to the late Charles A.... View Obituary & Service Information

The family of Nellie Leona Kirkpatrick created this Life Tributes page to make it easy to share your memories.

Send flowers to the Kirkpatrick family.