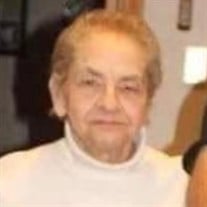 Norma J. Martin, 75, of Tionesta, passed away early Wednesday morning, September 1, 2021 at the Shippenville Healthcare Center. She was born on November 15, 1945 in Clarion; daughter of the late Paul and Alice Freeborn Clinger. Norma married Albert Martin on November 8, 1969, who preceded her in death in 1994. She was a loving and devoted homemaker. Norma enjoyed playing bingo, working on puzzles, and spending time with her family. She is survived by her two sons, Gregory Martin and his wife, Gail, of Lake Lucy and Albert Martin and his wife, Mary, of Oklahoma; seven grandchildren, Amanda Martin and her boyfriend, Justin Forsythe, of Fryburg, Shaylee Eisenman and her husband, Blaine, of Venus, Cassandra Martin of Oklahoma, Joey Clark and his wife, Nikki, of Strattanville, Kenny Martin and his wife, Monica, of Clarion, Kimberly Smith of Marienville; and Christopher Magness of Shippenville; and twelve great-grandchildren. Norma is also survived by her sister, Linda Shepard of Georgia; her brother, Jimmy Clinger of Michigan; a daughter-in-law, Jeri Beth; numerous nieces and nephews; and her caretaker and close friend, Karen Krepp. She was preceded in death by her parents; husband; a son, Tim Martin; and five siblings, Bonnie, Nancy, Irean, Mary, and Lewis. Family and friends will be received from 5 p.m. to 8 p.m. on Friday, September 3, 2021 at the Robert V. Burns Funeral Home in Clarion. Funeral services will be private. Interment will take place in the Tylersburg Cemetery. In lieu of flowers, Memorials or donations can be made in Norma’s name to the Alzheimer’s Association at alz.org.

The family of Norma J. Martin created this Life Tributes page to make it easy to share your memories.

Send flowers to the Martin family.