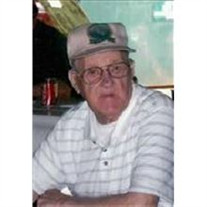 Otis M. Davenport Jr., 88, of Vine Street, Marienville, passed away Sunday night, June 7, 2009, at his residence. Born November 27, 1920, in Austin, PA, he was the son of Otis M. Davenport Sr. and Edith G. Allison Van Why.   Mr. Davenport served in the Army during World War II where he received a Defense Service Medal with six Bronze Service Stars, two Purple Hearts, Medal with Oak Leaf Cluster, American-European African Middle Eastern Service Medal, Bronze Star Combat Infantry Badge, Good Conduct Medal; and World War II Victory Medal.   He was married on December 17, 1965 to the former Willa Murdock Dixon, who survives.   Mr. Davenport retired in 1974 from Marienville Glass Container. He was also a bus driver in earlier years.   He was a member of the Marienville United Methodist Church.   Mr. Davenport was past president of M.A.C.A. and was on the board of directors.   He enjoyed word puzzles, jig-saw puzzles, and playing cards with his wife.   In addition to his wife, he is survived by children, Robin Heasley and husband, Ronald, of Leeper; Otis Davenport and wife, Linda, of Jeanette; David Dixon and wife, Pierette, of Georgia; Carol Rulhman and husband, Virgel, of Marienville; Marsha Silvis and Robert Selker of Clarion; Richard Dixon and wife, Chris, of Marienville; and Gloria Conboy of Erie.   He is also survived by sisters, Aldean Cochran, Doris Fawler, and Norma Roseman; and his second family, Donna Frost, Rita Beichner, and Jim Olson. Also surviving are numerous grandchildren, great grandchildren, nieces, and nephews.   In addition to his parents, he was preceded in death by brothers, Ed Van Why and Fred Van Why; and sister, Lucille Cochran.   Family will receive friends from 5 to 8 p.m. on Wednesday, June 10, 2009, and from 1 to 2 p.m. on Thursday, June 11, 2009, at the Ronald McDonald Funeral Home in Marienville.   Funeral services will be held at 2 p.m. in the funeral home with Rev. Randy L. Evans, Hospice Chaplain, officiating.   Interment will be held in the North Forest Cemetery.   The family suggests that donations be made to M.A.C.A. or Clarion Forest VNA Hospice.   Arrangements are being handled by the Robert V. Burns Funeral Home in Clarion.

The family of Otis M. Davenport created this Life Tributes page to make it easy to share your memories.

Send flowers to the Davenport family.