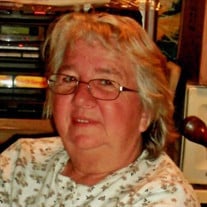 Patricia Ann Blum, 77, of Shippenville, passed away early Monday morning, December 20, 2021 at her home following a lengthy illness. She was born on September 22, 1944 in Clarion; daughter of the late Arthur Leroy and Margaret Olive Neese Lannigan. Pat married William Leroy Blum Sr. on March 15, 1969, who preceded her in death. She was a caretaker and a cake decorator, along with numerous other occupations throughout the years. Pat was a member of the Shippenville United Methodist Church. She was also a member of the Charitable Deeds in Knox. Pat enjoyed fishing, baking, cooking, and spending time with her grandchildren and great grandchildren. She is survived by her sons, William “Jay” Blum Jr. and Arthur Blum and his wife, Shannon; 2 grandchildren, David Blum and his significant other, Brenna, and Sasha Watkins and her husband, Joseph; and 4 great grandchildren, Jeffrey, Zaarek, Reilynn, and Karev. Pat is also survived by her siblings, Betty Strotman and her husband, Alex, Mary Dolby and her husband, Gerald, Thomas Lannigan, David Lannigan and his wife, Sue, Kevin Lannigan and his wife, Diane, and Kim Lannigan and numerous nieces and nephews. In addition to her parents and husband, Pat was preceded in death by her brother, William Lannigan and her beloved dog, Scotty. Friends and family will be received from 12 p.m. to 2 p.m. on Wednesday, December 22, 2021 at the Robert V. Burns Funeral Home in Clarion with funeral services to follow at 2 p.m. in the funeral home with Rev. Steven Ketner, pastor of the Shippenville United Methodist Church, presiding. Interment will follow in the Cedarview Memorial Park in Strattanville.

The family of Patricia A. Blum created this Life Tributes page to make it easy to share your memories.

Send flowers to the Blum family.