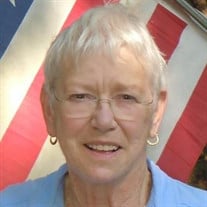 Patricia Arlene Stewart, 80, of Greensburg, Indiana, passed away on Sunday, November 19, 2017, at the Arbor Grove Village Nursing Home surrounded by loving family. She was born on October 20, 1937; daughter of the late Robert Dale Stewart and Mary Julia Fiscus Stewart. Patricia was raised in Clarion County on her family’s farm in Reidsburg. She graduated from Clarion Area High School and continued her education in Pittsburgh, receiving her RN degree from West Penn Hospital. Patricia worked for many years at West Penn and held various positions including Supervisor of the operating rooms. She spent her nursing career working at hospitals in Chicago, West Penn, and St. Francis Hospitals in Pittsburgh, and later retired from a Johns Hopkins affiliate hospital in Baltimore, Maryland. She built a beautiful home in Lewes, Delaware to be close to the beach which she loved. Patricia spent time fishing, reading, traveling, and tending to her beloved animals, many of them strays. Her other love was the Pittsburgh Steelers. She had Steeler memorabilia scattered throughout her home. Patricia spent many hours with her friends and was on the social committee for the community where she lived. She is survived by one brother, Gordon Stewart and his wife Dee of Mason, OH, and two sisters, Paula Stewart Ondrako and her husband Jim of Batesville, IN and Julia Stewart Dischler and her husband Steve of Sauk City, Wisconsin, and one step sister, Winona Grant Ace of Foxburg, PA. She is also survived by three sisters-in-law, Yvonne Stewart, Elaine Stewart and Sylvia Stewart and several nieces, nephews, cousins and many friends. In addition to her parents, Patricia was preceded in death by her brothers, Robert Stewart, James Stewart, and Joseph Roger Stewart, her step mother, Emma Grant Stewart, three step brothers, James Grant, Harold Grant, and Lavern Grant and one step sister, Doris Grant Craig. Patricia’s legacy will live on in the hearts and minds of everyone she interacted with, as well as those she touched through her involvement with many alcohol and drug programs. Support for her kindness, loyalty and compassion may be shown by volunteering or donating to your local Humane Society, or to the Dementia Association of America. A favorite verse which Pat kept by her bedside read, Giving – One of life’s greatest rules . . . “You cannot hold a torch to light another’s path without brightening your own.” Her light not only shone brightly, but she made all those around her feel care for and loved. A Memorial Service will be held at the Robert V. Burns Funeral Home in Clarion at a date and time to be announced. She will be laid to rest next to her mother at the Catholic Clarion Cemetery.

The family of Patricia A. Stewart created this Life Tributes page to make it easy to share your memories.