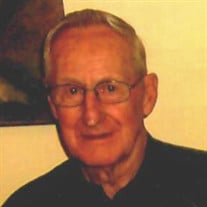 Paul Joseph Lauer, 95, loving husband, father, grandfather, and great-grandfather, passed away peacefully at his home in Shippenville surrounded by family members on Thursday, January 20, 2022. Born on February 21, 1926; he was the son of the late Augustine and Philomena (Selker) Lauer. Paul attended the Lauer School in Knox Township and later started working in a local coal mine. He joined the military in 1944, at age 17, with a note of permission from his parents and some support from a medical technician who assisted with his color blindness. During his time in the United States Navy, he served as a Seaman First Class in World War II and proudly remembered working on the U.S.S. Savannah when they served as a decoy to escort President Franklin D. Roosevelt to Malta. He was honored with an American Theater Ribbon and a Victory Medal. When Paul was on leave from the military, he returned home to Shippenville and met his future wife, Lois (Baines) Lauer, at a square dance at the glass plant. They were married July 13, 1946 and spent 69-years together, during which time they had two children, Paul Lauer and LuAnn (Lauer) Spence, five grandchildren, and six great-grandchildren. He was known by people in the community for the 25 years he spent in the service department at Seidle Chevrolet in Clarion. He was also strongly committed to his faith and was an active member of Holy Trinity Lutheran Church in Shippenville. Everyone who knew Paul knows he loved life. His positive spirit was steadfast and he will be remembered for his kindness, compassion, loyalty, patience, humor, and infectious smile that brought light to any room. He was both genuine and generous, and a man of his word. He had a deep appreciation for mother nature and could often be found mowing lawns, walking his dog, or sitting in his sunroom birdwatching. He enjoyed spending time with those he loved and appreciated Sunday dinners, weekly lunches, dinner dates, and picnics with family members and close friends. He is survived by his son, Paul Lauer, Jr. and his wife, Cathy, of Strasburg, VA; his daughter, LuAnn (Lauer) Spence and her husband, Tom, of Shippenville; his grandchildren, Jackie Lauer of Sterling, VA, Tom Spence and his wife, Jill, of Shippenville, Nick Lauer and his wife, Jennifer, of Strasburg, VA, Jodi (Spence) Jones and her husband, Brian, of Baltimore, MD, and Amy (Spence) Samuels and her husband, Gregory, of Birmingham, AL; his great-grandchildren, Nate, Clay, and Ben Lauer, Joseph and Brooklyn Spence, and Sidney Jones; and his precious dog, Vinny. Paul was preceded in death by his parents, his loving wife and partner, Lois Lauer, as well as five siblings, Bill, Andrew, and Jack Lauer, Helen (Lauer) Fasenmyer, and Agnes (Lauer) Dechant. The Robert V. Burns Funeral Home in Clarion is handling the arrangements. Per Paul’s request, there will be no public visitation. There will be a memorial service for Paul and Lois at 1 p.m. on Saturday, May 14, 2022 at the Holy Trinity Lutheran Church in Shippenville with Rev. Harold O. Jacobson, presiding. Military Honors will be accorded prior to the service at 12:45 p.m. by the American Legion Post #066 of Clarion. Interment will take place in the Emmanuel Lutheran Cemetery in Shippenville. In lieu of flowers, memorial contributions may be made in memory of Paul Lauer to Clarion Forest VNA/Hospice, 271 Perkins Road, Clarion, PA, or Tri-County Animal Rescue, 9562 Route 32, Shippenville, PA.

Paul Joseph Lauer, 95, loving husband, father, grandfather, and great-grandfather, passed away peacefully at his home in Shippenville surrounded by family members on Thursday, January 20, 2022. Born on February 21, 1926; he was the son of the... View Obituary & Service Information

The family of Paul J. Lauer created this Life Tributes page to make it easy to share your memories.

Send flowers to the Lauer family.