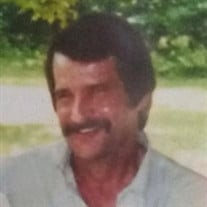 Randy John Deitz, 67, of Knox, passed away on Friday, September 11, 2020 at the Allegheny General Hospital in Pittsburgh surrounded by his family. He was born on September 21, 1952 in Brookville; son of the late Johnny Deitz and Eleanor Holiday Deitz of Shippenville. Randy married the former Judy Magness on June 20, 2002, who survives. He worked for 14 years at the Knox Glass Plant and 17 years for Astro Homes in Shippenville. Randy attended the Callensburg Methodist Church. He was a member of the American Legion Post #720 of Knox. Randy enjoyed hunting and spending time with his family, especially his grandchildren. He loved his dog; Babygirl, who was his companion and went everywhere he went. Randy is survived by his loving wife: Judy, of 18 years; six children: Amanda Rowe and her husband, Chet, of North Carolina, Josh Deitz and his wife, Dixie, of Georgia, Mary Martin and her husband, Albert, of Oklahoma, Jodi Heath of Knox, Toni Clark and her fiancé, Dustin Duffee, of Turkey City, and Don Clark, Jr., and his wife, Rebecca, of Cranberry; nine grandchildren: Brent and Cayley Rowe, Joseph Clark, Cassandra Martin, Brycon and Brandi Slaugenhaupt, Aaron Clark, Caylee Greenawalt, and Dominic Clark; and numerous great grandchildren. He is also survived by his brother: Bob Deitz and his wife, Susie, and their children, Jeff Deitz and his girlfriend, Maggie, Andrea Porter and her husband, Wes, and Kristen Beck and her husband, Brian; his sister: Peg Wetzel and her husband, Gerald, and their son: Ryan Wetzel and his wife, Shawn; and numerous great nieces and nephews. Randy was preceded in death by his father; his infant sister: Cindy Lynn; and his nephew: Bob Deitz, Jr. The Robert V. Burns Funeral Home in Clarion is handling the arrangements. At Randy’s request, there will be no public visitation. A celebration of Randy’s life will be celebrated at the convenience of the family.

Randy John Deitz, 67, of Knox, passed away on Friday, September 11, 2020 at the Allegheny General Hospital in Pittsburgh surrounded by his family. He was born on September 21, 1952 in Brookville; son of the late Johnny Deitz and Eleanor Holiday... View Obituary & Service Information

The family of Randy J. Deitz created this Life Tributes page to make it easy to share your memories.

Randy John Deitz, 67, of Knox, passed away on Friday, September...

Send flowers to the Deitz family.