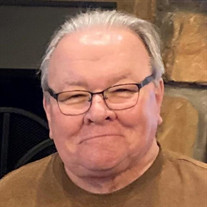 Richard P. “Rich” Hilderbrand, 70, of Cooksburg, formerly of Millvale, passed away unexpectedly of natural causes early Tuesday morning, December 21, 2021 at his home. He was born on August 26, 1951 in Pittsburgh; son of the late Robert and Patricia McGuigan Hilderbrand. Rich proudly served in the United States Army Reserves. He married the love of his life, Cheryl Johns, on May 28, 1971, who survives. Rich worked as a service technician for PPG Industries in Pittsburgh until he retired in 2012. Rich and Cheryl then moved to Cooksburg to enjoy their retirement. He was a member of the Moose Lodge #101 and the American Legion Post #066, both of Clarion. Rich loved outdoor activities, including hunting, golfing, camping, and canoeing with his family. He also enjoyed traveling with his wife. Rich is survived by his loving wife, Cheryl of 50 wonderful years; his daughter, Kimberly Pillage and her husband, Keith, of McCandless; his son, Richard R. Hilderbrand and his wife, Denise, of West View; and 6 grandchildren, R.J., Kaitlynne, Blake, Jared, Miranda, and Kaylee. He is also survived by his brother, Robert Hilderbrand of New Hampshire; 2 sisters, Sue Schell and her husband, Elmer, of Baden and Diane Nix of South Carolina; along with numerous nieces and nephews. Rich was preceded in death by his parents. The Robert V. Burns Funeral Home in Clarion is handling the arrangements. Per Rich’s wishes, there will be no public visitation. A celebration of life will be held at a later date. In lieu of flowers, the family suggests donations be made in Rich's name to the Tunnel to Towers Foundation, 2361 Hylan Blvd., Staten Island, NY 10306.

Richard P. &#8220;Rich&#8221; Hilderbrand, 70, of Cooksburg, formerly of Millvale, passed away unexpectedly of natural causes early Tuesday morning, December 21, 2021 at his home. He was born on August 26, 1951 in Pittsburgh; son of the late... View Obituary & Service Information

The family of Richard P. Hilderbrand created this Life Tributes page to make it easy to share your memories.

Send flowers to the Hilderbrand family.