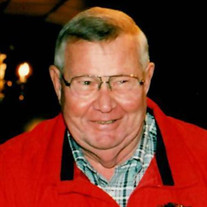 Richard W. “Dick” Keenen, 86, of Clarion, passed away peacefully early Wednesday, March 17, 2021 at his home. He was born on November 23, 1934 in Johnsonburg; son of the late Eugene J. and Veronica Miller Keenen. Dick graduated from Central Catholic High School in 1952. He proudly served in the US Navy during the Korean Conflict. Dick married the former Rose Rupprecht on October 27, 1962, who survives. He worked for National Fuel Gas for 44 years, retiring in 1996. Dick was a member of the Immaculate Conception Catholic Church in Clarion where he was also a part of the Knights of Saint George and Knights of Columbus. Dick was also a member of the American Legion Post #066 of Clarion and the Clarion Oaks Golf Course, where he was also a Ranger. He was a huge Notre Dame fan his entire life. Dick enjoyed watching sports on TV. He umpired for the Clarion Little League for numerous years. Dick also loved to golf and hunt. He is survived by his beloved wife, Rose of 58 years; four children, Dave Keenen of Shippenville, Barb Keenen of Georgia, Peggy Corp and Jay of Virginia, and Pat Keenen and his wife, Erynn, of Texas; ten grandchildren, Rachel, Rick, Abbie, James, Kaila, Kelli, Eddie, Nathan, Sean, and Hadley; and five great grandchildren, Andrew, Logan, Olivia, Eliza, and Nicholas. Dick is also survived by his sister, Joan LeGrys of Saint Mary’s. He was preceded in death by his parents; a brother, Father Donald Keenen, OSB; a sister, Elizabeth Ann Shafer; and a daughter-in-law, Barbara Keenen. The family will receive friends from 2 p.m. to 4 p.m. and 6 p.m. to 8 p.m. on Friday, March 19, 2021 at the Robert V. Burns Funeral Home in Clarion. A Christian Wake Service will be held at 3:30 p.m. Military honors will be accorded by the American Legion Post #066 at 10:15 a.m. on March 20, 2021 in the funeral home with Mass of Christian Burial to follow at 11 a.m. at the Immaculate Conception Catholic Church in Clarion with Rev. Monty Sayers presiding. Interment will take place in the Immaculate Conception Catholic Cemetery. In lieu of flowers, Donations or memorials can be made to the Clarion Forest VNA, 271 Perkins Road, Clarion, PA 16214, the Immaculate Conception Catholic School, 729 Main Street, Clarion, PA 16214, or to the Clarion Little League, PO Box 502, Clarion, PA 16214.

The family of Richard W. Keenen created this Life Tributes page to make it easy to share your memories.

Send flowers to the Keenen family.