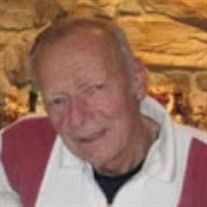 Richard D. “Dick” Thompson, 82, of Clarion, passed away peacefully on Wednesday, November 6, 2019 at the McKinley Health Center in Brookville from Alzheimer’s disease. He was born on December 4, 1936 in Scotch Hill; son of the late Frank and Pauline Jean Henry Thompson. Dick graduated from Clarion Area High School in 1954. He married the former Kathleen Ganoe on April 13, 1961; whom survives. Dick was a math teacher at Neshaminy School District in Langhorne for 34 ½ years, teaching in both the middle and high school, where he was also in charge of the Math Department. He was a member of the Immaculate Conception Catholic Church in Clarion. Dick loved being outdoors. He enjoyed working with wood, doing numerous remodeling projects around the house. Dick also enjoyed photography, fishing trips with the guys he taught with, and spending time with his grandchildren. He is survived by his loving wife; his daughter: Theresa Lynn Boone and her husband, Dave, of Pennsburg; his son: Michael Albert Thompson and his wife, Sandra, of New Hope; and five grandchildren: Jaclyn, Rachel, Christopher, Peter, and William. Dick is also survived by his brother: Carl Thompson and his wife, Kitty, of Central, SC and numerous nieces and nephews. He was preceded in death by his parents and sister: Betty Heller. The Robert V. Burns Funeral Home in Clarion is handling the arrangements. The family will receive friends from 10 a.m. to 11 a.m. at the Immaculate Conception Catholic Church in Clarion on Monday, November 11, 2019, where Mass of Christian Burial will follow at 11 a.m. in the church with Rev. Samuel Bungo, pastor of the Saint Charles Catholic Church in New Bethlehem. In lieu of flowers, donations can be made in Richard’s name to the Alzheimer’s Association. The family would like to thank all the workers at the McKinley Heath Center for all the care and support.

The family of Richard D. Thompson created this Life Tributes page to make it easy to share your memories.

Send flowers to the Thompson family.