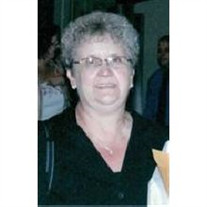 Rita K. Wilson, 62, of Market Street, Strattanville, died Wednesday, March 17, 2010, at the DuBois Regional Medical Center. Born November 11, 1947, in Brookville, she was the daughter of Gerald P. and Dorothy Underwood Reinsel. She was married on May 8, 1967, to Robert A. Wilson, who survives. Mrs. Wilson was a representative aid to State Representative Donna Oberlander, 63rd District and previously with Fred McElhatten for a total of 10 years. She was a member of the Immaculate Conception Church in Clarion. Mrs. Wilson was an active member of the American Cancer Society, Lions Club, and the National Rifle Association. She was on the board of directors of The Arc of Clarion County and was a licensed notary. At the time of her death, she was serving on the Strattanville Borough Counsel, was a member of the Republican Committee Women for Strattanville, and involved with the Cancer Center at the Clarion Hospital. Mrs. Wilson was very active in the construction of the moving wall and WWII and Korean War monuments in the park. In addition to her husband, she is survived by one son, Steven Wilson and wife, Heidi, of Russell; one brother, Paul “Bud” Reinsel and wife, Ruth, of Strattanville; two sisters, Susan Dusty Davis and husband, Russ, of Strattanville, and Donna Reinsel of Strattanville; and four grandchildren, Mark, Megan, Erin, and Abigail Wilson. Also surviving are aunts, Grace McDivett of Strattanville, and Berdine Weible of California, PA; uncle, Kenneth Underwood of Hyde Park, NY; and a number of nieces and nephews. In addition to her parents, she was preceded in death by infant children, Joseph Paul and Leigh Anne. Family will receive friends from 2 to 4 p.m. and 7 to 9 p.m. on Friday, March 19, 2010, at the Robert V. Burns Funeral Home in Clarion. Christian wake service will be held at 3:30 p.m. on Friday, March 19, 2010, in the funeral home. Mass of Christian burial will be held at 10 a.m. on Saturday, March 20, 2010, at the Immaculate Conception Church in Clarion with Rev. Monty Sayers, pastor of the Immaculate Conception Church, presiding. Interment will be held at the Cedarview Memorial Park in Strattanville.

The family of Rita K. Wilson created this Life Tributes page to make it easy to share your memories.

Send flowers to the Wilson family.