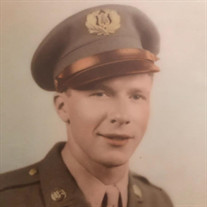 Robert L. “Bob” Fox went to be the Lord on September 12, 2021 at 3:05 p.m. at the Clarion Health and Rehabilitation Center. He was 92 years old. Bob was married to June Avanelle Miller on June 3, 1948 in Mayport. She went to be the Lord on September 8, 2015. Bob was born on November 19, 1928 to the late Burton R. and Dorothy Clark Fox in East Brady. He attended Union School District where he excelled in music and the marching band playing the Tuba. That horn followed him home for lunch and back. He then joined the US Army and once basic training was over they asked the Privates “Does anyone play music?” and the Drill Sargent continued, “not a radio”. So they inducted him into the Army Band. He spent AIT studying his heart’s desire playing the Tuba. After that he was sent to Colorado Springs to an Airforce Base and joined a band of some 600 pieces and playing the Tuba. Bob worked at the Rex Hide Corp. for 30 years until they moved to Tyler, Texas. He was the last person leaving the plant at shut down. Bob became an employee of Union School District where he retired from. He worked in all three school buildings where he loved the students. After retirement, the Union School District honored him at the Veterans Day Celebration with a Union High School Diploma. It was a great day for him and his family. Bob was devout Christian during his years from his marriage day until his death. He held many positions in the Church of God at Fairmount City and served as a Sunday School Superintendent for many years and the Board of Trustee's for many years among the few. He is survived by his three sons, Ronald L. Fox and his wife, Edie, of Clarion, Gary G. Fox and his wife, Tricia, of Snow Shoe, and Mark D. Fox and his wife, Cindy, of Clarion; seven grandchildren, Kristina Robinson and her husband, Stoney, of Texas, Brian Fox and his wife, Heather, of Clarion, Chris Fox of Rimersburg, Elizabeth Corbett of New York, Fulton Fox of Snow Shoe, Dylan Fox and his wife, Lindsey, of Clarion, and Mason Cramer of Mill Hall; 12 great grandchildren, Christian, Rona Lee, Grace, Eliana, Brian Henry, Mahela, Georgia, Cooper, Ada, Philip “Ferg”, Ophelia, and Rowan; and a great-great grandson, Levi. Bob is also survived by his siblings, Jack Fox and his wife, Pearl, of Towanda, Beverly Fox Bross and her husband, Bob, of Florida, and Shirley Cole of Distant. In addition to his parents and wife; Bob was preceded in death by his grandson, Nicholas Fox and three brothers, Burton Fox, Jr., Sheldon Fox, and James Fox. Family and friends will be received from 11 a.m. to 12:45 p.m. on Saturday, September 18, 2021 at the Burns Funeral Home & Crematorium, Inc. in Rimersburg with Military Honors to be accorded by the American Legion Honor Guard Post #0454 and the VFW Post #7132 of Rimersburg at 12:45 p.m. Funeral services will follow in the funeral home at 1 p.m. with Lay Minister Brenda Haws, presiding. Interment will take place in the Mount Zion Cemetery in Oakridge. In lieu of flowers, memorials or donations can be made in Bob’s name to the Jerusalem United Church of Christ, 527 Main Street, P.O. Box 307, Rimersburg, PA 16248.

The family of Robert L. Fox created this Life Tributes page to make it easy to share your memories.

Send flowers to the Fox family.