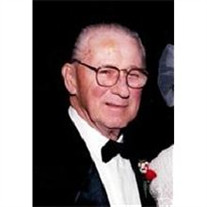 Robert F. “Bob” Griebel, 85, of Miola Road, Clarion, passed away early Tuesday morning, December 1, 2009, at the Golden Living Center in Clarion. Born February 2, 1924, in Lucinda, he was the son of Albert and Philomena “Ollie” Lutz Griebel. Mr. Griebel was married on August 14, 1950 to the former Geraldine “Gerry” Hepful, who survives. He served in the United States Air Corp during World War II and the Korean War.  He was honorably discharged with the rank of Staff Sergeant. Mr. Griebel cut lumber for Morris Lumber for 23 years.  He also worked for the C&K Coal Company for 15 years, retiring in 1986.  He was a member of the Immaculate Conception Church in Clarion. Mr. Griebel enjoyed hunting, fishing, gardening, and the outdoors.  He was a member of the VFW and American Legion, both of Clarion. Mr. Griebel loved his dog, Bisket and cat, Freckles. In addition to his wife, he is survived by five children, Sandra Bell and husband, Ray, of Knox; Gerald “Gene” Griebel of Reidsville, NC; Connie Ingham and husband, Mark, of Herndon, VA; Glenn “Herb” Griebel of Clarion; and Tracy Luden and husband, Steve, of Miola.  She is also survived by five grandchildren, Chad Bell and wife, Mandy, of Pleasant Gap; Shawn Bell and wife, Lara, of Knox; Jason Bell and wife, Carolyn, of Wentling’s Corners; George and Ben Ingham of Herndon, VA; two great-grandchildren, Jessica and Josh Bell of Knox; and two step-grandchildren, Krista and Keith Griebel of Reidsville, NC and their families. Also surviving are brother, Gerald “Jake” Griebel and wife, Maxine, of Poconos; and sister, Christina “Kissy” Griebel of Erie.   In addition to his parents, he was preceded in death by daughter-in law, Linda Griebel, four sisters, and three brothers. Family will receive friends from 6 to 8 p.m. on Thursday, December 3, 2009, at the Robert V. Burns Funeral Home in Clarion. Military service will be conducted by the American Legion Post #66 of Clarion at 10 a.m. on Friday, December 4, 2009, in the funeral home. Mass of Christian Burial will be held at 11 a.m. on Friday, December 4, 2009, at the Immaculate Conception Church in Clarion with Rev. Monty Sayers, pastor of the Immaculate Conception Church, presiding.   Interment will be held in the Immaculate Conception Cemetery.

The family of Robert F. Griebel created this Life Tributes page to make it easy to share your memories.

Send flowers to the Griebel family.