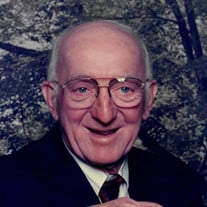 Robert J. Schwabenbauer, Sr., 92, of Clarion, passed away Thursday morning, May 2, 2019 at his home. He was born on July 22, 1926 in Lucinda; son of the late Aloysius J. and Edith G. Gatesmen Schwabenbauer. Bob graduated from the Saint Joseph Catholic School in 1946. He married Freda A. Strickenberger at the Saint Michaels Church in Fryburg on September 8, 1952, and she survives. Bob worked at G.E. in Erie and later worked at the Owens Illinois Glass Plant for 32 ½ years, retiring in 1988. He was a member of the Immaculate Conception Catholic Church in Clarion, where he was also a member of the Knights of Saint George and the Knights of Columbus at Saint Joseph Church in Lucinda where he served as Grand Knight for one year. Bob was also a member of the Fraternal Order of Eagles #3807 of Clarion. He loved music and played the guitar and mouth organ at the same time. Bob also enjoyed camping and traveling out west and to Florida. His favorite vacation was a trip to Alaska for a month with his wife, brother, and sister-in-law. Bob is survived by his loving wife; five children: Bob Schwabenbauer, Jr. and his wife Amy of Weedville, Bill Schwabenbauer and his wife Jill of Springfield, VA, Deb Lutz and her significant other Greg Tobin of Oil City, Sandy Porter and her husband Eric of Waynesboro, and Ron Schwabenbauer of Clarion; and his grandchildren: Megan Petraska and her husband Andy of Euclid, OH, Jessica Schwabenbauer and her fiancé Wes Smith of Falls Creek, Julia Schwabenbauer of Columbus, OH, Laura Schwabenbauer of Springfield, VA, and Hunter, Derek, Travis, Desiree, Kierstin, and Haley Porter all of Waynesboro. He is also survived by his two brothers: Dennis Schwabenbauer and his wife Dorothea of Shippenville and Arthur Schwabenbauer and his wife Joanie of Downingtown and two sisters: Mary Jane Jadlockie and her husband Robert of North Carolina and Diane Bauer and her husband Raymond of Lucinda. Bob was preceded in death by his parents; a son: Rick; two brothers: Regis and Leon; two sisters: Alberta Schwabenbauer and an infant sister; and a son-in-law: James Lutz. The family will receive friends from 1 p.m. to 4 p.m. on Sunday, May 5, 2019 at the Robert V. Burns Funeral Home in Clarion. A Wake Service will be held at 3:45 p.m. on Sunday in the funeral home. Mass of Christian Burial will be celebrated at 11 a.m. on Monday, May 6, 2019 at the Immaculate Conception Catholic Church in Clarion with Rev. Monty Sayers presiding. Interment will follow in the Immaculate Conception Catholic Cemetery. The family would like to thank the Clarion Forest V.N.A & Hospice staff for their compassionate care for the past seven months. Memorials or donations can be made in Bob’s name to the Clarion Forest V.N.A. & Hospice, 271 Perkins Road, Clarion, PA 16214.

Robert J. Schwabenbauer, Sr., 92, of Clarion, passed away Thursday morning, May 2, 2019 at his home. He was born on July 22, 1926 in Lucinda; son of the late Aloysius J. and Edith G. Gatesmen Schwabenbauer. Bob graduated from the Saint Joseph... View Obituary & Service Information

The family of Robert J. Schwabenbauer Sr. created this Life Tributes page to make it easy to share your memories.

Send flowers to the Schwabenbauer family.