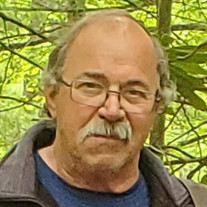 Roger A. Wagner, 66, of Shippenville, passed away Friday evening, December 31, 2021 at the UPMC Hamot Hospital in Erie following a brief illness. He was born on January 18, 1955 in Clarion; son of the late Paul and Marrion Hunt Wagner. Roger was a 1975 Clarion Area High School graduate. He married the love of his life, Sharon Hargenrader, on September 9, 1978, who survives. You would hardly ever see the one without the other. Roger worked as a foreman laying gas pipelines for numerous years until he retired. He was a member of the Pennsylvania Steel Workers for 38 years. Roger was also the first male auxiliary member of the Clarion VFW. He enjoyed working on mowers and cars in his garage with his brother, Ron. Roger also enjoyed attending auctions and doing DIY with his wife. He loved riding his motorcycle, playing games on his phone, and spending time with his family, especially his grandchildren and his dog, Kodi. Roger is survived by his wife, Sharon of 43 wonderful years; his daughter, April Ulsh and her husband, Jeremy, of Tower City; his son, Josh Wagner and his wife, Crystal, of Shippenville; 4 grandchildren, Olivia Ulsh and Xander Ulsh, both of Tower City, and Riley Wagner and Russell Wagner, both of Shippenville; and a great grandson, Noah Rebuck. He is also survived by his brothers, Bob Wagner and his wife, Rosalyn, of Clarion, Thomas Wagner and his wife, Patricia, of Texas, John Wagner and his wife, Sandy, of Sligo, Merle “Jake” Wagner of Shippenville, Ron Wagner and his wife, Sandy, of Tionesta, Jerry Wagner and his wife, Brenda, of Knox, and George Wagner of Shippenville; his sister, Betty “Sis” Snyder of Shippenville; a sister-in-law, Wanda Wagner of Shippenville; and numerous nieces and nephews. In addition to his parents, Roger was preceded in death by his brother, Harry “Ed” Wagner. Family and friends will be received from 5 p.m. to 7 p.m. on Thursday, January 6, 2022 at the Robert V. Burns Funeral Home in Clarion. Funeral services will be private. Interment will take place in the Cedarview Memorial Park in Strattanville. A celebration of life will be held from 6 p.m. to 8 p.m. on Saturday, January 8, 2022 at the Clarion VFW. The family strongly suggests donations be made to the Clarion VFW Auxiliary in lieu of flowers, 603 Liberty Street, Clarion, PA 16214.

Roger A. Wagner, 66, of Shippenville, passed away Friday evening, December 31, 2021 at the UPMC Hamot Hospital in Erie following a brief illness. He was born on January 18, 1955 in Clarion; son of the late Paul and Marrion Hunt Wagner. Roger... View Obituary & Service Information

The family of Roger A. Wagner created this Life Tributes page to make it easy to share your memories.

Roger A. Wagner, 66, of Shippenville, passed away Friday evening,...