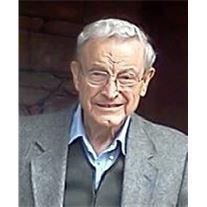 Ronald E. Hanold, 85, of Emlenton, formerly of Clarion, died Monday, December 2, 2013, at the Clarion Hospital. Born January 20, 1928 in Franklin; he was the son of Arthur and Myrna Foy Hanold. Ronald was a graduate of Farmington High School in Tylersburg. A veteran, he served in the Navy from 1945 to 1949. Ronald was first married on May 20, 1950 to the former Anna Rose Drayer, who preceded him in death on August 9, 1969.  He was then married on June 15, 1972 to the former Elsie Luella Carrier Miller, who also preceded him in death on April 7, 2008. He retired at the Owens Illinois Glass Plant after 34 years of service, where he worked as a machine repair supervisor. Ronald was a member of the American Legion Post 66, VFW Post 2145, and Moose Lodge 101, all of Clarion. Surviving are four children, Jean Louise Lobaugh and her husband, Michael, of Mayville, NY, Robert A. Hanold and his companion, Veronica Morrow, of Emlenton, Sandra K. Hanold of Pittsburgh, and Gary E. Hanold and his wife, Trisha, of Hayesville, NC; a stepson, Edward Miller and his wife, Rose, of Bergenfield, NJ; and five grandchildren, Jessica L. Pavlinko of Portland, OR, John Pavlinko of San Francisco, CA, Jonathan Lobaugh and his wife, Hallie, of Seattle, WA, and Kristen and Izabella Hanold of Hayesville, NC. Also surviving is a brother, Audley W. Hanold and his wife, Peg, of Erie, and numerous nieces and nephews. He was preceded in death by his parents, both wives, and a daughter, Joyce Elaine Hanold. Family will receive friends from 2 to 4 p.m. and 6 to 8 p.m. on Wednesday, December 4, 2013, at the Robert V. Burns Funeral Home, 638 Wood Street, Clarion. Military honors will be accorded at 10:45 a.m. on Thursday, December 5, 2013, by American Legion Post 66 of Clarion. Funeral services will be held at 11 a.m. on Thursday, December 5, 2013, in the funeral home with Pastor Randy Evans, Clarion Forest VNA Hospice Chaplain, officiating. Interment will be held in the Immaculate Conception Cemetery.

Ronald E. Hanold, 85, of Emlenton, formerly of Clarion, died Monday, December 2, 2013, at the Clarion Hospital. Born January 20, 1928 in Franklin; he was the son of Arthur and Myrna Foy Hanold. Ronald was a graduate of Farmington High School... View Obituary & Service Information

The family of Ronald E. Hanold created this Life Tributes page to make it easy to share your memories.

Send flowers to the Hanold family.