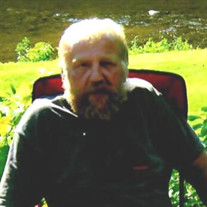 Ronald J. “Ron” Klein, 63, of West Freedom, went to be with the lord Tuesday evening, May 4, 2021 at the Clarion Hospital. He was born on May 17, 1957 in Pittsburgh; son of Ronald A. Klein of Hilliards and Charlotte A. Driver Klein of Clarion. Ron attended Moniteau High School. He worked for numerous oil wells in the Parker area and also worked for a farm in West Freedom up until he was diagnosed with Esophageal Cancer. He was a member of the West Freedom United Methodist Church. Ron was a man of many trades. He enjoyed gardening, hunting, farming, going to auctions, and spending time with his dogs, Honey and Coco. He is survived by his parents; his children, Ronnie Klein of Sligo, Adrienne Klein of Rimersburg, Mike Klein of Butler, and Corinne Klein of Butler; the Switzer children; eight grandchildren, Chloe, Kaleb, Terry, Halie, Hannah, Paige, Aubree, and John; and a great granddaughter, Chloe, with another one on the way named Alaia. Ron is also survived by his two brothers, Mike Klein and his wife, Tammy, of Butler and John Klein and his wife, Jeanne, of Harrisville; three sisters, Charlene Cotherman and her husband, Tom, of Shippenville, Darlene Klein of Knox, and Marlene Pantoja and her husband, Antonio, of Butler; his four step-sisters, Sheila Carson of Altoona, Darla Smith and her husband, Stan, of Sligo, Sonia Carson of Saxonburg, and Teresa Frain and her husband, Larry, of Ford City; and numerous nieces, nephews, aunts, and uncles. The family will receive friends from 1 p.m. to 3 p.m. on Friday, May 7, 2021 at the Robert V. Burns Funeral Home in Clarion with funeral services to follow in the funeral home with Pastor Travis Earp, pastor of the Living Word Church in Oil City. Livestreaming of the service will begin at 3 p.m. View the service via our facebook page at Burns Funeral Homes. Interment will follow in the Immaculate Conception Catholic Cemetery in Clarion. The family would like to thank Ernie Switzer, Jr. for all the love and care that he gave for Ron. For all of the people that prayed hard for Ron, the prayers have been answered because he has been healed.

The family of Ronald J. Klein created this Life Tributes page to make it easy to share your memories.

Send flowers to the Klein family.