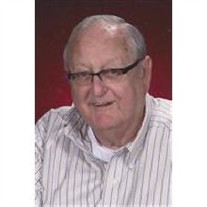 Ronald E. Perry, 73 of Clarion died on February 23rd at 8:25 p.m. at Allegheny General Hospital following a short illness. He was born July 30, 1938, the son of George Perry and Eleanor Ross Perry. Ron graduated from Clarion Area High School in 1957. He served in the United States Army during the Vietnam Conflict, and was employed with Owens-Illinois Glass Company for 43 years. Ron married Yvonne Schrecengost on July 25, 1964 and became the father of three daughters; Kimberly, Melissa and Rhonda. Ron loved all things sports. His favorite sport being football- Clarion High School Bobcats, Pitt University and most of all the Pittsburgh Steelers and tailgating before the games. He also avidly followed the NASCAR race series. He loved summer vacations sitting on the beach at the Outer Banks every year. He also thought everyone should enjoy gaming (slots) as much as he frequently did. And Ron loved to talk and visit with everyone he knew; his favorite topics were his children and grandchildren. He will be sadly missed. Ron will be remembered by the hundreds of people he touched in a multitude of volunteer community services. His activities have included active membership in the Clarion Volunteer Fire Company, Board member of the Clarion Area School District for 32 years, member and current Chairman of the Clarion County Career Center Joint Operating Committee for many years. Ron also served on the Clarion Credit Union board and the Clarion Borough Planning Commission. In 1993, Ron was named Citizen of the Year by the Clarion Area Chamber of Commerce in recognition of his years of community involvement with the Little League Baseball Program as well as the previously cited memberships. And let’s not forget the retirees weekly breakfast at the County Seat. Ron was a member of Immaculate Conception Church in Clarion where he served as an usher in the past. Ron is survived by his wife, daughters and sons-in law, Michael (Kimberly) Griffith of Pittsburgh, Greg (Melissa) Fetzer of Clarion and Randy (Rhonda) Shook of Clarion. He is also survived by his grandchildren, Corey Griffith, Abby Griffith, Lindsay Shook and Maya Shook, whom he adored as much as they loved him.  Two step-granddaughters, Michelle and Sasha Fetzer also survive. Additional survivors are a brother, Charles (Doris) Perry of Erie, sisters, Doll (Robert) Padget of Washington state, Nancy Perry of Pittsburgh, Linda (Morrie) Lawrence of Warren and an “adopted” sister, Betty Brewster of Pittsburgh. A family of in-laws also survives, namely mother-in-law, Dora Schrecengost of Fryburg, and Cathy Schrecengost of Shippenville also Ray (Mary) Schrecengost of Newport News, Virginia; Jerry (Cathy) Schrecengost of Festus MO; Deborah (Curt) Boyles of Venus, PA; Denny (Bonnie) Schrecengost of Warren, PA; Lenny (Ann) Schrecengost of Tiona, VA; Linda Swab of Brookville, PA and Steven (Kathy) Schrecengost of Oswego, NY. Numerous nieces and nephews also survive. Ron was preceded in death by his parents, father-in-law, Raymond Schrecengost, sisters, Barbara Weeter and Georgianna Lawson and a step-grandson, Billy Bobbert. Family will receive friends from 6 to 8 p.m. on Sunday, February 26, 2012, and from 2 to 4 p.m. and 6 to 8 p.m. on Monday, February 27, 2012, at the Robert V. Burns Funeral Home, 638 Wood Street, Clarion.   Christian wake service will be held at 8 p.m. on Monday, February 27, 2012, in the funeral home.   His mass of Christian burial will be celebrated 11 a.m. on Tuesday, February 28th at the Immaculate Conception Church, Clarion, with the Rev. Monty Sayers, pastor of the Immaculate Conception Church, presiding.   Interment will be held in the Immaculate Conception Cemetery. The family requests any memorials be made to the Immaculate Conception Church, 720 Liberty Street, Clarion PA 16214.

The family of Ronald E. Perry created this Life Tributes page to make it easy to share your memories.

Send flowers to the Perry family.