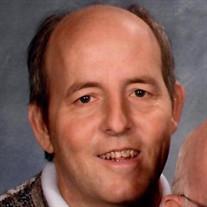 Ronald Paul Schwabenbauer, 57, a lifelong resident of Clarion, PA, passed away early Saturday, November 6, 2021 at Penn Highlands, DuBois, following an extended illness. He was born on July 20, 1964 in Brookville; a beloved son of the late Robert J. Schwabenbauer and Freda Strickenberger Schwabenbauer, who survives. Ron was a 1983 graduate of Clarion-Limestone High School. He was an enthusiastic follower of C-L sports his entire life, and could often be found in the stands watching football, basketball, or volleyball games. He always had some colorful commentary on the games to add! Ron was affectionately known as “Swabby” to his friends around town. Prior to his illness, one of his favorite activities was to “sign the books” at all the local clubs he belonged to, including the Eagles, Moose and Fryburg Sportsman’s Club. He especially enjoyed the Eagles club, and prior to his most recent illness, enjoyed playing card games there. He was a lifelong member of Immaculate Conception Church in Clarion. Ron dealt with a myriad of health issues his entire life. He had multiple surgeries, including two kidney transplants, which failed, leading to a third kidney and pancreas transplant several years ago. Like his father before him, Ron didn’t do a lot of complaining about his health issues. He lived with the hand he was dealt and made the best of things. Prior to becoming disabled, Ron last worked at Commodore Homes. Ron lived his entire life with his parents and had a special relationship with them. Following the death of his father in 2019, Ron and his mom supported and relied on each other. Ron enjoyed driving his mom around to sign the books at the local clubs and to see the local sights. They also enjoyed sitting around the fire on their property and roasting hot dogs. Ron is survived by his mother, Freda Schwabenbauer; his brothers Robert J. Schwabenbauer and his wife, Amy, and Bill Schwabenbauer and his wife, Jill; his sisters, Deb Lutz and her significant other, Greg Tobin, and Sandy Porter and her husband, Eric; seven nieces:, Megan Petraska and her husband, Andy, Jessica Smith and her husband, Wes, Julia and Laura Schwabenbauer, and Desiree, Haley and Kierstin Porter; and two nephews, Travis and Derek Porter. He is also survived by two great nephews, Kailoh and Adalai Wilder and a special great niece born in April 2021, Adeline Petraska, who due to his illness and the Covid pandemic, he was never able to meet. Ron was preceded in death by his older brother, Richard Schwabenbauer, in 1983; his beloved father, Robert, in 2019; and a brother-in-law, James Lutz. Family and friends will be received from 3 p.m. to 6 p.m. on Monday, November 8, 2021 at the Robert V. Burns Funeral Home in Clarion. Additional viewing will be held from 10 a.m. to 11 a.m. on Tuesday, November 9, 2021 at the Immaculate Conception Catholic Church in Clarion with Mass of Christian Burial to follow at 11 a.m. with Rev. Monty Sayers, pastor, and Father Matthew Strickenberger, cousin of Ron, as co-celebrant and preacher. Interment will take place in the Immaculate Conception Catholic Cemetery. In lieu of flowers, the family suggests donations to be made to the American Transplant Foundation at www.americantransplantfoundation.org or to Clarion Forest VNA, 271 Perkins Road, Clarion, PA 16214. The family also asks everyone to consider becoming an organ donor.

Ronald Paul Schwabenbauer, 57, a lifelong resident of Clarion, PA, passed away early Saturday, November 6, 2021 at Penn Highlands, DuBois, following an extended illness. He was born on July 20, 1964 in Brookville; a beloved son of the late Robert... View Obituary & Service Information

The family of Ronald P. Schwabenbauer created this Life Tributes page to make it easy to share your memories.

Send flowers to the Schwabenbauer family.