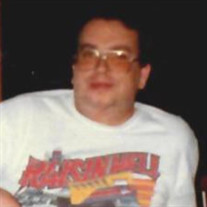 Roy Douglas Bunch, 66, of Knox, passed away peacefully on Friday, February 19, 2021 at the Clarion Hospital surrounded by his children from complications of Diabetes. He was born on November 25, 1954 in Oil City; son of James and Ruby Moyer Bunch of Clarion. Roy was a 1973 graduate of Clarion Limestone High School. He was a well-known man, especially when it came to dirt track racing. Roy could often be found at the Eagles Club in Clarion where he served as a former President and Officer and current Treasurer, or at his brother Mark's, enjoying a Steeler game. He loved spending his summer weekends at Camp Ashleigh with his family. Roy's love for his children and grandchildren was rivaled only by his love of all things dirt track racing. He spent majority of his life lending a helping hand to numerous local and Regional drivers on their pit crews. Short of family gatherings, nothing made him happier than spending a day at any given race track, most recently having helped around Sportsman's Speedway. In addition to his parents, he is survived by his children, Casey M. Bunch and Christopher J. Bunch and his wife, Natasha; his grandchildren, Jodi, Violet, Kenzie, Kymberlee, Ethan, and Kaiden, all of Oil City; five siblings, Allison (Bruce) Thompson of Corsica, Craig (Karen) Bunch of Texas, Doris (Roger) Troup of Strattanville, Mark (Brenda) Bunch of Clarion, and Robin Tidd of Arizona; as well as several nieces and nephews. Roy’s children would like to send a heartfelt thank you to the ICU staff at the Clarion Hospital, who did their very best to work a miracle but their father's body and soul were ready to move on. The Robert V. Burns Funeral Home in Clarion is handling the arrangements. Per the family's request there will be no public visitation. Roy will be cremated and celebration of life will be planned for this summer.

Roy Douglas Bunch, 66, of Knox, passed away peacefully on Friday, February 19, 2021 at the Clarion Hospital surrounded by his children from complications of Diabetes. He was born on November 25, 1954 in Oil City; son of James and Ruby Moyer... View Obituary & Service Information

The family of Roy D. Bunch created this Life Tributes page to make it easy to share your memories.

Roy Douglas Bunch, 66, of Knox, passed away peacefully on Friday,...

Send flowers to the Bunch family.