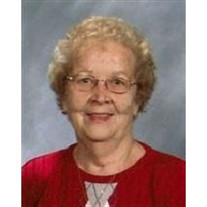 Sally A. Bish, 74, of Corsica, died early Tuesday morning, September 11, 2012, at her home. Born October 15, 1937, in Brookville; she was the daughter of Arthur and Melda Coulter Clark. She was married on August 28, 1953 to Larry N. Bish, and he survives. Mrs. Bish was a homemaker. She was a member of the Immaculate Conception Church of Clarion. Mrs. Bish was also a member of the Clarion Oaks Golf Course where she was an avid golfer.  She was a former member of Hi-Level Golf Course.  She also enjoyed spending time with her grandchildren. In addition to her husband, she is survived by three children, Mitzie Leadbetter of Corsica; Greg Bish and his wife, Connie, of Corsica; and Jeffrey Bish and his wife, Cindy, of Brookville; a daughter-in-law, Robin Bish of Corsica; ten grandchildren, Tracy Rothwell, Kellie Hinderliter, Leah Baker, Casey Painter, Shylo Neely, Lynsey Bish, Jesse Bish, Justin Bish, Morgan Bish, and Gavin, Bish; and ten great grandchildren. Also surviving are two sisters, Nancy Armagost and her husband, Dave, of Corsica; and Cathy Neal and her husband, Walt, of Brookville. She was preceded in death by her parents, a son, Terry Bish, and a son-in-law, Mike Leadbetter. Family will receive friends from 2 to 4 p.m. and 7 to 9 p.m. on Thursday, September 13, 2012, at the Robert V. Burns Funeral Home, 638 Wood Street, Clarion. Christian wake service will be held at 8:30 p.m. on Thursday, September 13, 2012, in the funeral home. Mass of Christian Burial will be celebrated at 11 a.m. on Friday, September 14, 2012, in the Immaculate Conception Church, Clarion, with Rev. Monty Sayers, pastor of the Immaculate Conception Church, presiding. Entombment will be held in the Immaculate Conception Cemetery Mausoleum. Memorials and donations can be made the Immaculate Conception Church, 720 Liberty Street, Clarion PA 16214.

The family of Sally A. Bish created this Life Tributes page to make it easy to share your memories.