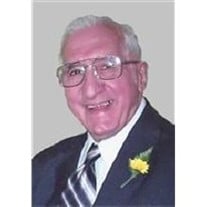 Salvatore “Tom” Venturella, 94, of Shippenville, died Sunday morning, March 3, 2013, at the Clarion Hospital. Born April 3, 1918, in Oil City, he was the son of Cosimo and Antonina Leta Venturella. He was married on July 30, 1944 to the former Mildred Elizabeth Von Volkenburg, who died on June 5, 2012. A veteran, he served in the Navy during WWII. Mr. Venturella lived most of his life in Oil City where he raised his family.  In 2004, he and his wife moved to Shippenville. They owned and operated Siverly’s Golden Dawn Store in Oil City until retirement in 1979. They enjoyed dancing, bowling, and playing cards with friends and family.  He played the violin in the Oil City High School Orchestra, and in later years, played the mandolin in family musical gatherings. He was a loving and supportive grandparent and great grandparent, known to them as “Papa” and “Great Papa”. Mr. Venturella was a Catholic and attended Our Lady Help of Christian’s Church in Oil City.  As a young man, he served as an altar boy, and as an adult, he served as a lector.  Since 2004, the Venturellas were members of the Immaculate Conception Parish in Clarion. Surviving are two children, Thomas L. Venturella and his wife, Joanne, of Fayetteville; and Judy Bruner and her husband, Dan, of Shippenville; seven grandchildren; and nine great grandchildren. He was preceded in death by his parents; wife; four brothers, Gus Venturella, Bill Deliberti, Joe Venturella, and Vince Venturella; and five sisters, Crissa Venturella, Nina Jeffries, Etta Venturella, Lilia Shoop, and Tillie Niederriter. Family will receive friends from 2 to 4 p.m. and 7 to 9 p.m. on Friday, March 8, 2013, at the Robert V. Burns Funeral Home, 638 Wood Street, Clarion. Military honors will be accorded by American Legion Post 66 of Clarion at 10:15 a.m. on Saturday, March 9, 2013, in the funeral home. Mass of Christian Burial will be celebrated at 11 a.m. on Saturday, March 9, 2013, in the Immaculate Conception Church in Clarion with Rev. Monty Sayers, pastor of the Immaculate Conception Church, presiding. Interment will be held in the Immaculate Conception Cemetery.

The family of Salvatore Venturella created this Life Tributes page to make it easy to share your memories.

Send flowers to the Venturella family.