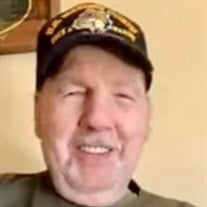 Samuel Lloyd “Sam” Hook, Sr., 91, of Rimersburg, left this world unexpectedly of natural causes early Wednesday morning, November 17, 2021 at the Clarion Hospital. Sam was born on April 4, 1930, being the sixth of nine children to the late Shaner and Mentie McCall Hook. He was born on the family farm in Huckleberry Ridge, which is still owned by family members today. His stories about growing up on the farm, hard work, and the antics of growing up there will be cherished by those who knew him. After graduating from Keystone High School, Sam married the love of his life, Laura “Dude” King, on September 26, 1950 and they remained settled in the Rimersburg area. She preceded him in death in 2004. Undoubtedly, she has left a light on for him. Shortly after their marriage, Duty called and Sam became a United States Marine serving in Korea during the Korean War. When hearing Sam’s stories of his service, not only would one see tears in his eyes for his brothers that were lost, but pride in his voice for having served. Sam would not hesitate to remind you “Once a Marine, Always a Marine”. Most days he would still be seen wearing one of his Marine Corps shirts and jackets. Sam always laughed “Old Marines don’t die, they just regroup”. As a young man, Sam worked for his family’s business plastering walls of businesses and homes. He held other various jobs before his employment at C&K Coal Co. where he retired after 36 years of employment. Sam was operator of the D5 dozer building ponds, waterways and roads for C&K and had many stories of his equipment operator days which could amaze and make you laugh at the situations he found himself in. Even after his retirement, Sam hardly slowed down, always finding someone to help or something to do. He enjoyed traveling and camping with Dude in their motorhome, babysitting the grand and great grandchildren, and mowing yard for his children. Even until his passing, he could be seen making his rounds in town or walking his “puppies”. He will forever be remembered for the love he had for his family, his strong and kind heart, his ability to story tell and joke, and his enjoyment of a good cup of coffee and cherry pie. Besides many dear friends, Sam is survived by his children, Susan “Maya” Smith of Rimersburg, Sam Hook, Jr. and his significant other, Darla Shick, of Rimersburg, and Terry Hook and his wife, Elaine, of Mayport; two daughters-in-law, Betsy Hook of Brookville and Penny Gourley of Reidsburg; and many grandchildren, great grandchildren, and great-great grandchildren. He is also survived by a younger sister, Hanna of Oklahoma and a younger brother, Merle and his wife, Linda, of Huckleberry Ridge. In addition to his parents and wife, Sam was preceded in death by his sons, Paul “Dub” and Andy; an infant daughter, Donna Lee; a son-in-law, Kerry Smith; his granddaughter, Kelly Hopper; and his siblings, James, Ivan, Georgie, Laverne, Doris and Archie. Family and friends will be received from 2 p.m. to 4 p.m. and 6 p.m. to 8 p.m. on Friday, November 19, 2021 at the Burns Funeral Home & Crematorium, Inc. in Rimersburg. Additional viewing will be held from 10 a.m. to 10:45 a.m. on Saturday, November 20, 2021 in the funeral home with Military Honors to be accorded by the American Legion Honor Guard Post #0454 and the VFW Post #7132 of Rimersburg at 10:45 p.m. Funeral services will follow in the funeral home at 11 a.m. with Rev. Larry Piper, pastor of the Sligo Chapel. Interment will take place in the Providence Cemetery in Knox. In lieu of flowers, Donations can be made in Sam’s honor to the Wounded Warrior Project online at www.woundedwarriorproject.org.

The family of Samuel L. Hook Sr. created this Life Tributes page to make it easy to share your memories.

Send flowers to the Hook family.