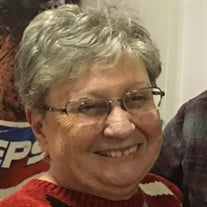 Sandra L. “Sandy” Himes, 78, of Strattanville, passed away peacefully at her home on Saturday, January 29, 2022 from an extended illness surrounded by her family. She was born on March 21, 1943 in Brookville and raised in Summerville. Sandy was the daughter of the late James “Jim” and Bernice Ishman Whiteman. She attended Summerville and Brookville schools. Sandy married the love of her life, Donald B. “Don” Himes, Sr., on July 20, 1960, who survives. She worked at WWCH Radio Station in Clarion and was also a bookkeeper for Guiher Ford, which then became Clarion Ford Garage and Seidle Chevrolet. Sandy was also the Tax Collector for Millcreek Township for several years. She was a member of the Millcreek Presbyterian Church in Fisher where she was involved in the youth fellowship for several years. Sandy enjoyed camping, traveling, and spending time with her family. She also loved her trips to the Casino. Sandy was an avid bingo player and enjoyed getting together with her card club group every month. She will be deeply missed by her family and friends. Sandy is survived by her loving husband, Don of 61 years; her children, Sherri McGuire and her husband, Lee, and Kim Henry and her husband, Dan, all of Limestone, Don “Coop” Himes, Jr. and his wife, Daphne, and Tonya Macefe and her husband, Dave, all of Kingsville; her grandchildren, Danielle Kunselman and her husband, Derek, of Corsica, Tim McGuire and his wife, Sarah, of Virginia, Eric Henry and his wife, Courtney, of New York, Adam Henry and his wife, Farah, of Ohio, Meagan Hightower and her husband, Will, of Virginia, Jesse Himes and his wife, Marissa, of Limestone, Davi Macefe, and his fiancé, Autumn, of Blairsville, and Michael Macefe and his girlfriend, Amanda, of Erie; 8 great grandchildren, Alycia and Kahlin McGuire, Lilly, Keira, Zoey, and Mya Henry, Savannah Hightower, and Emma Himes; and her beloved cat, Paige. She is also survived by her sister, Deb Campbell and her husband, Mark, of Strattanville and her brother, Craig Whiteman and his wife, Deb, of Ohl; along with several nieces and nephews. Sandy was preceded in death by her parents. Family and friends will be received from 3 p.m. to 7 p.m. on Tuesday, February 1, 2022 at the Robert V. Burns Funeral Home in Clarion. Funeral services will be held at 11 a.m. on Wednesday, February 2, 2022 in the funeral home with Rev. Raafat Girgis, pastor of the New Rehoboth-Greenville Presbyterian Church in Clarion, presiding, with Rev. James Dietrich, retired pastor, assisting. Interment will follow in the Cedarview Memorial Park in Strattanville. In lieu of flowers, the family suggests donations be made in Sandy’s honor to the Clarion Forest VNA, 271 Perkins Road, Clarion, PA 16214 or to the Southern Clarion County Ambulance Ser-vice, 10515 Route 68, Rimersburg, PA 16248.

Sandra L. &#8220;Sandy&#8221; Himes, 78, of Strattanville, passed away peacefully at her home on Saturday, January 29, 2022 from an extended illness surrounded by her family. She was born on March 21, 1943 in Brookville and raised in Summerville.... View Obituary & Service Information

The family of Sandra L. Himes created this Life Tributes page to make it easy to share your memories.

Send flowers to the Himes family.