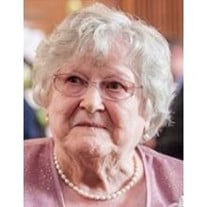 Sarah J. “Sally” Gathers, 87, of Sligo, passed away on Wednesday, February 22, 2017 at the Butler Hospital on the same day that would have been her 70th Wedding Anniversary. She was born on April 19, 1929 In Scotch Hill; daughter of the late Edwin B. and Lillis L. Mills Gilmore. Sally was married on February 22, 1947 to Harold E. Gathers, and he preceded her in death. She worked at the former A.S.R. Medical Supply and then the G.C. Murphy in Clarion for many years, retiring as an assistant Manager. Sally attended the Curllsville Grace Community Church for over 20 years. She enjoyed gardening and flowers, spending time and playing games with her grandchildren. Sally is survived by her two daughters, Cheryl Milanovich and her husband Allan of Butler and Dianne Radaker and her husband Ron of Sligo, her four sons, Leo E. Gathers and his wife Sharon of Sligo, twin sons, Daniel Gathers and his wife Marcia of Rimersburg and Ronald Gathers and his wife Gail of Sligo, also another twin son, Connell Craig Gathers and his wife Margo of Mississippi, numerous grandchildren and great grandchildren, one sisters, Olive Kale of Tylersburg, three sisters-in-law, Frances Gathers, Louise Gathers, and Deloris Wenner all of Sligo, one brother-in-law, Connell Gathers also of Sligo, and numerous nieces and nephews. She was preceded in death by her parents, husband, a son, William Keith Gathers, a grandson, one brother, Edwin, four sisters, Betty, Helen, Jane, and Nellie. Family will receive friends from 2 p.m. to 4 p.m. and 7 p.m. to 9 p.m. on Friday, February 24, 2017 at the Robert V. Burns Funeral Home in Clarion and also from 10 a.m. to 11 a.m. on Saturday, February 25, 2017 at the Curllsville Grace Community Church with Funeral Services to be held at 11 a.m. with the Rev. Tom Switzer, pastor presiding. Interment will be held in the Clarion Cemetery. In Lieu of flowers donations can be made to a Charity of one’s choice.

The family of Sarah J. Gathers created this Life Tributes page to make it easy to share your memories.

Send flowers to the Gathers family.