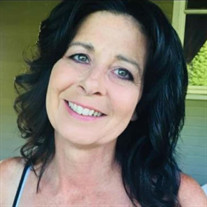 Shari E. Shovestull, 53, of Strattanville, passed away on Sunday, January 16, 2022 at the UPMC Northwest Hospital in Seneca following a short, but courageous battle with Lung Cancer. She was born on February 14, 1968 in Clarion; daughter of Leonard Smith, Sr. and Jackie Hinderliter Smith of Strattanville. Shari graduated from Keystone High School in 1986. She married Paul Shovestull on July 17, 2021, who survives. Shari loved her job working as a Legal Secretary at the Marshall Law Office in Shippenville. She was a member of the American Legion Post #66 Ladies Auxiliary in Clarion. Shari enjoyed reading, watching horror movies, and spending time with her grandchildren, who she adored. Shari was also huge into fashion. She is survived by her husband, Paul; her daughter, Katelyn Kaber and her husband, Adam, of Lamartine; her son, Ethan Moon and his partner, Cassidy Black, of Clarion; a step-son, Kris Minich and his wife, Sasha, of Brady’s Bend; a step-daughter, Becca Pettit and her husband, Shaun, of Lone Pine; and 6 grandchildren. Shari is also survived by her brothers, Leonard “Zeke” Smith, Jr. and his wife, Trudy, and Paul Smith and his wife, Bobbi, all of Shippenville; her uncles, Herbert “Jim” Hinderliter and his wife, Pat, of Strattanville and Robert “Bob” Bish of Shippenville; her father-in-law and mother-in-law, Don and Linda Shovestull of Strattanville; a sister-in-law, Donna Buckner of Strattanville; and numerous nieces, nephews, and cousins. She was preceded in death by her paternal grandparents, Paul and Phyllis Dolby; her maternal grandparents, Paul and Dorothea Smith; 2 uncles, Blake Hinderliter, Jr. and Randy Dolby; and 2 aunts, Paula Bowser and Jane Bish. Family and friends will be received from 2 p.m. to 4 p.m. and 6 p.m. to 8 p.m. on Thursday, January 20, 2022 at the Robert V. Burns Funeral Home in Clarion. Funeral services will be held at 11 a.m. on January 21, 2022 in the funeral home with Rev. Charlie Cotherman, pastor of the Oil City Vineyard Church, presiding. The family would like to extend a special thank you to the nursing staff on the 2nd floor at the UPMC Northwest Hospital for all their care and compassion that they showed Shari.

Shari E. Shovestull, 53, of Strattanville, passed away on Sunday, January 16, 2022 at the UPMC Northwest Hospital in Seneca following a short, but courageous battle with Lung Cancer. She was born on February 14, 1968 in Clarion; daughter of... View Obituary & Service Information

The family of Shari E. Shovestull created this Life Tributes page to make it easy to share your memories.

Send flowers to the Shovestull family.