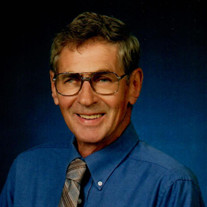 Sheriden L. “Andy” Anderson, 80, of Miola, passed away Thursday morning, April 18, 2019 at his home. He was born on September 11, 1938 in Warren; son of the late Lloyd and Katherine Hansen Anderson. Andy was the last surviving member of his immediate family. He served in the US Army Reserves. On April 18, 1959, Andy married the former Helen Smerkar, and she survives. He passed on their Anniversary date of 60 years. Andy was a carpenter and built and remodeled many houses in the Clarion and surrounding areas. He was a member of the Immaculate Conception Catholic Church in Clarion. Andy enjoyed woodworking, carving, and playing cards with their good friends, Joe and Rita. In addition to his wife Helen, Andy is survived by his five children: Tom Anderson, Tim Anderson and his wife Dixie all of Clarion, Tina Rex and her husband John of Jamestown, PA, Terry Anderson of Utica, and Todd Anderson and his wife Missy of Swanton, Ohio; fifteen grandchildren: Christy and Tommy Anderson, Linnea and Sunny Linseth, Toby Fulmer Anderson, Jessica Ross, Amanda Davis, Heather Taraczkozy, Erin Day, Rachel, Kristen, Danielle, and Stephanie Anderson, and Kaitlyn and Tyler Anderson; and eight great grandchildren. He was preceded in death by his parents; his brother: Martin Anderson; his sister: Autumn McElhatten; and his favorite dog: Casey. The family will receive friends from 3 p.m. to 6 p.m. on Tuesday, April 23, 2019 at the Robert V. Burns Funeral Home in Clarion. Services will be held at 11 a.m. on Wednesday, April 24, 2019 in the Funeral Home with Rev. Monty Sayers, pastor of the Immaculate Conception Catholic Church in Clarion. Interment will be held in the Miola Cemetery. The family would like to thank all the caregivers and nurses from the V.N.A. Hospice for their wonderful care and kindness.

The family of Sheriden L. Anderson created this Life Tributes page to make it easy to share your memories.