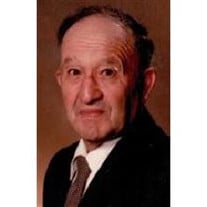 Silver Pasquarette, 97, formerly of Hartman Road, Clarion, died Wednesday, December 22, 2010, at the Golden Living Center in Clarion where he had resided for the past two and a half years. Born January 21, 1913, in Greensburg, he was the oldest child of Daniel and Josephine Carrier Pasquarette. In his early years, he was a miner and he also worked for the Pennsylvania Railroad, but most of his life he was dairy farmer.  He was also a Wayne Feed dealer for 10 years. After his retirement, Silver enjoyed gardening, fishing and watching television. Silver was a member of the New Rehoboth Greenville Presbyterian Church and was the caretaker of the Rehoboth Cemetery for 25 years. He was married on September 27, 1941, to the former Mabel Hartman, who preceded him in death on December 9, 2009. Silver is survived by a daughter, Nancy Hawkins and her husband, Donald, of Venus; a son Gerald “Jerry” and his wife, Carole, of Clarion; two granddaughters, Rhonda (Mark) Merritt of Guy Mills and Roxanne (Dar) Edwards of Cochranton; and three great-granddaughters, Ashley and Emily Merritt and Morgan Cope. Also surviving are two sisters and their husbands, Pauline and Alden DuPont of Millsboro, Delaware, and Mary and Ralph Vencill of Palatine, Illinois; and numerous nieces and nephews. In addition to his parents and his wife, he was preceded in death by an infant daughter, Judith Marie; three brothers, William, Michael, and Carl; and three sisters, Anna Gifford, Lucille Ransom, and Clara Pasquarette. The family will receive friends from noon to 4 p.m.  on Monday, December 27, 2010, at the Robert V. Burns Funeral Home, 638 Wood Street, Clarion. Funeral services will be held at 4:30 p.m. on Monday, December 27, 2010, in the funeral home with Rev. James Dietrich, pastor of the New Rehoboth Greenville Presbyterian Church, officiating. Interment will be held in the New Rehoboth Cemetery. In lieu of flowers, memorial contributions may be given to Ascera Care Hospice, 231 Allegheny Blvd., Suite B, Brookville PA 15825, or to the New Rehoboth Greenville Presbyterian Church, 1419 Rehobeth Church Road, Clarion PA 16214.

Silver Pasquarette, 97, formerly of Hartman Road, Clarion, died Wednesday, December 22, 2010, at the Golden Living Center in Clarion where he had resided for the past two and a half years. Born January 21, 1913, in Greensburg, he was the oldest... View Obituary & Service Information

The family of Silver Pasquarette created this Life Tributes page to make it easy to share your memories.

Send flowers to the Pasquarette family.