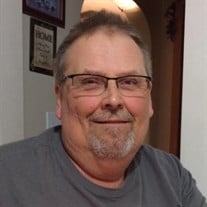 Terry W. Aites, 58, of Lucinda, passed away on Tuesday, November 24, 2020 at the UPMC Presbyterian Hospital in Pittsburgh following a courageous battle with Covid-19. He was born on January 21, 1962 in Butler; son of the late William Aites and Shirley Switzer Aites of Limestone. Terry graduated from Union High School in 1979. He married his best-friend and the love of his life, Deb Burkhardt, on May 13, 2000, who survives. Terry was part of the road crew for Toby Township and worked at IA Construction as a heavy equipment operator. He attended the New Hope Church of Clarion. Terry enjoyed hunting and riding his four wheeler. He loved to attend Emily’s sporting events and spending time with his family. Terry will be deeply missed by everyone who knew him. He is survived by his mother, Shirley; his beloved wife, Deb, of Lucinda; two daughters, Krystal Vrobel and her husband, Joel, of Punxsutawney and Emily Aites of Lucinda; a sister, Margie Hartle and her husband, Jeffrey, of Limestone; a brother, Tim Aites and his wife, Michelle, of Limestone; his three nieces, Meghan Shilling and her husband, James, of Falls Creek, Morgan Hartle of Limestone, and Taylor Aites of Limestone; a nephew, Travis Aites also of Limestone, and his dog, Riley. He is also survived by his three brothers-in-law, Ron Burkhardt and his wife, Diane, of Leeper, Rod Burkhardt and his wife, Kathy, of Lucinda, and Fred Burkhardt and his wife, Lynnie, of Lucinda. Terry was preceded in death by his father; his paternal grandparents, William and Evelyn Aites; his maternal grandparents, Russell and Vernie Switzer; his father-in-law and mother-in-law, Paul and Iva Burkhardt, and numerous uncles and aunts. Due to the Covid-19 pandemic, there will be no public visitation. A private family funeral will be held at the Robert V. Burns Funeral Home in Clarion. Live streaming of the funeral will begin at 11 a.m. on Monday, November 30, 2020. View the service via our facebook page at Burns Funeral Homes. Interment will follow in the Rimersburg Cemetery. In lieu of flowers, memorials or donations can be sent in Terry’s name to the Clarion Forest VNA, 271 Perkins Road, Clarion, PA 16214.

Terry W. Aites, 58, of Lucinda, passed away on Tuesday, November 24, 2020 at the UPMC Presbyterian Hospital in Pittsburgh following a courageous battle with Covid-19. He was born on January 21, 1962 in Butler; son of the late William Aites and... View Obituary & Service Information

The family of Terry W. Aites created this Life Tributes page to make it easy to share your memories.

Terry W. Aites, 58, of Lucinda, passed away on Tuesday, November...

Send flowers to the Aites family.