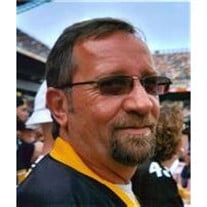 Terry Arthur Bish, 52, of Corsica, died unexpectedly Wednesday, February 10, 2010, at his residence. Born November 23, 1957, in Brookville, he was the son of Larry N. and Sally A. Clark Bish of Corsica. Terry was married on July 10, 1982 to the former Robin Nailor, who survives. He graduated from Clarion-Limestone High School in 1975. Terry worked at the Clarion University of Pennsylvania for 34 years, where he was currently the Interim Director of Facilities Maintenance. Terry was a member of the Immaculate Conception Church in Clarion. He was also a member of the Eagles in Brookville. Terry enjoyed riding his Harley, golfing, and helping his family. In addition to his wife and parents, he is survived by daughters, Lynsey F. Bish of Clarion; and Shylo Neely of OH; and grandson, Zachery Neely of OH. Also surviving are brothers, Greg Bish and wife, Connie, of Corsica; Jeff Bish and wife, Cindy, of Corsica; sister, Mitzie Leadbetter of Corsica; sisters-in-law, Susan Giannitiaponi and husband, Robert, of Boot Wayne, DE; and a number of nieces, nephews, aunts, and uncles. He was preceded in death by his in-laws, Irvin L. Nailor Jr. and Frances Nailor; grandparents, Quinton and Mildred Bish; and Arthur and Melda Clark; brother-in-law, Mike Leadbetter. Family will receive friends from 1 to 3 p.m. and 7 to 9 p.m. on Sunday, February 14, 2010, at the Robert V. Burns Funeral Home in Clarion. Wake service will be held at 8:30 p.m. in Sunday, February 14, 2010, in the funeral home. Mass of Christian Burial will be held at 11 a.m. on Monday, February 15, 2010, at the Immaculate Conception Church in Clarion with Rev. Monty Sayers, pastor of the Immaculate Conception Church, officiating. Interment will be held in the Immaculate Conception Cemetery. In lieu of flowers, the family requests that donations be made to the Clarion University Foundation, Clarion University, 840 Wood Street Clarion PA 16214, or to the American Cancer Society, 320 Bilmar Drive Pittsburgh PA 15205.

The family of Terry A. Bish created this Life Tributes page to make it easy to share your memories.