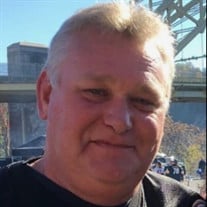 Thaddeus E. “Ted” Habuda, Jr., 54, of Strattanville, passed away Tuesday morning, January 22, 2019 at his home surrounded by family and friends. He was born on April 14, 1964 in Mercer; son of the late Thaddeus E. Habuda, Sr. and Shirley Jean Leary Habuda. Ted married Diana E. Dennison on December 14, 2018, and she survives. He served in the United States Air Force from 1984 to 1988. Ted retired as an Air Traffic Controller in 2016 after 31 years. He was a member of the National Air Traffic Controllers Association. Ted was also a member of the Moose Lodge #101 and the Fraternal Order of Eagles #3807 both of Clarion. He enjoyed motorcross racing, riding his Harley, boating, camping, hunting, traveling, snowmobiling, and making world famous dinners for family and friends. Ted is survived by his wife, four sons, John Habuda and his fiancé Randi, Brandon Habuda, Garret Neill, and Trevor Buckley and his wife Hannah, and his daughter, Briana Phillips. Ted is also survived by his siblings, Kim Booth and her husband John, Phil Habuda, Alice Davis and her husband Eric, and Janice Hadley and her husband Sonny. He was preceded in death by his parents and his mother-in-law, Helen L. McCullough. Service will be held at noon with a Celebration of Life for Ted to follow until 4 p.m. at the Clarion Moose Lodge #101 on Saturday, February 2, 2019. The Robert V. Burns Funeral Home in Clarion is handling the arrangements. In Lieu of flowers, there will be a basket at the Service for donations to the Clarion Cancer Center.

The family of Thaddeus E. Habuda Jr. created this Life Tributes page to make it easy to share your memories.

Send flowers to the Habuda family.