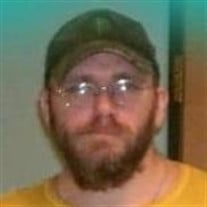 Thomas “Tom” Alcorn, 38, of Corsica, passed away unexpectedly due to complications from a stroke Sunday evening, May 20, 2018 at the U.P.M.C Hospital in Pittsburgh. He was born on May 1, 1980 in Pittsburgh; son of Harry Alcorn and his wife Barb of Emlenton and Pamela Ward and her husband James of Corsica. Tom worked at the former Triple J Truck Stop in Strattanville. He enjoyed fishing, playing video games, and spending time with his son and family. Tom is survived by his parents, his son, Bryan Alcorn of Strattanville, a brother, Matt Alcorn of Strattanville, two step brothers, James Crisman of Coal City and Jeff Crisman of Emlenton, his maternal grandparents, Lewis “Dean” and Betty Confer of Brookville, and his best friend, Clifford Salsgiver of Clarion. He was preceded in death by his sister, Susan Alcorn, his step sister, Cindy Miller, his paternal grandfather, Wayne Alcorn, and his paternal grandmother, Jean Alcorn. There will be no public visitation. A Memorial Service will be held at 2 p.m. on June 30, 2018 at the Robert V. Burns Funeral Home in Clarion. Donations can be made to the Funeral Home to help the family with Funeral expenses.

The family of Thomas Alcorn created this Life Tributes page to make it easy to share your memories.

Send flowers to the Alcorn family.