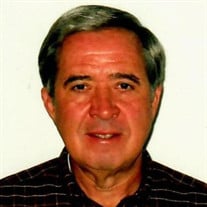 Thomas J. Bolents, 71, of Clarion, passed away on Saturday, July 18, 2020 at his home after a lengthy illness. He was born on April 27, 1949 in Clearfield; son of the late John Peter and Eva Jane Savel Bolents. Mr. Bolents graduated from St. Francis School in Clearfield and attended numerous secondary schools, such as Automation Institute in Pittsburgh, Technician Training School in Dubois, Old Dominium University, and U.S. Navy computer programming school. He served in the United States Navy where he worked for Naval Intelligence for two years and aboard a supply ship for two years. Mr. Bolents would often say the U.S. Navy opened many doors for him and instilled a sense of responsibility and organization. He was married to Jacqueline Marie Weaver on November 9, 1974, who survives. She was the love of his life. Mr. Bolents worked at General Electric in Erie for 15 years in the computer department and for A.O. Smith Corporation in Texas for 12 years. From 1988 to 2012, he was a member of the Holy Spirit Catholic Church in Horizon City, Texas. Mr. Bolents was an usher, was elected as the vice-chairman of the Finance Council for two terms, counted collections and helped at many festivals, yard sales, and fund raisers. Mr. Bolents was also a member of St. Richards Catholic Church in Rimersburg and Immaculate Conception Catholic Church of Clarion. He and his wife, Jackie, would take communion to the sick at the Clarion Hospital on a monthly basis. He was a member of the Knights of Columbus, Council 10420, at St. Stevens Church in El Paso, Texas, and a twenty-three member of the Ft. Bliss Rod and Gun Club where he was a co-match director of a popular handgun shoot. Also a member of the Sportsman’s Club of Forest County and the Sligo Sportsman’s and Archery Club. In his earlier years, he was an avid skeet shooter and won many competitions. Mr. Bolents enjoyed working around the house and going on weekend trips. He built the home they lived in at Horizon City, Texas with the help of his wife, Jackie, and his children. He would often say that he was so proud of his children and grandchildren that the “button would pop off of his shirt when he talked about them”. Mr. Bolents is survived by his loving wife: Jackie Weaver Bolents of Clarion; his two daughters: Vanessa Renee Rogers and her husband, Shawn, and their daughter, Saoirse, of Denver, Colorado and Teresa Marie Goodrich and her husband, Christopher, and their son Stanley, and daughter, Dolores Rose, of Evansville, Indiana. He is also survived by his sister: Mary Margaret Bolents of El Paso, Texas and his brother: Michael Bolents of Tucson, Arizona. Mr. Bolents was preceded in death by his parents. The Robert V. Burns Funeral Home in Clarion is handling the arrangements. The family will receive friends from 10 a.m. to 11 a.m. on Saturday, July 25, 2020 at the Immaculate Conception Catholic Church in Clarion with a Mass of Christian burial to follow in the Church at 11 a.m. with Rev. Monty Sayers presiding. Interment will be held in the Saint Michaels Catholic Cemetery in Fryburg. In lieu of flowers, Donations or memorial can be made is Mr. Bolents name to the Immaculate Conception Catholic Church, 720 Liberty Street, Clarion, PA 16214.

Thomas J. Bolents, 71, of Clarion, passed away on Saturday, July 18, 2020 at his home after a lengthy illness. He was born on April 27, 1949 in Clearfield; son of the late John Peter and Eva Jane Savel Bolents. Mr. Bolents graduated from St.... View Obituary & Service Information

The family of Thomas J. Bolents created this Life Tributes page to make it easy to share your memories.

Thomas J. Bolents, 71, of Clarion, passed away on Saturday, July...

Send flowers to the Bolents family.