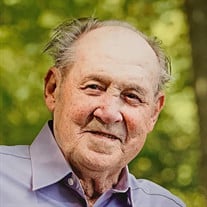 Thomas Dean Rankin, 84, of Clarion, passed away Friday evening, February 12, 2021 at home due to complications from a massive stroke. He was born on October 19, 1936 in Rimersburg; a son of the late Jesse Dale and Stella Mae Wensel Rankin. Tom graduated from Union High School in 1955 and then served in the US Army 82nd Airborne Division in Fort Bragg. He worked at Sharon Steel Mill as an electrician for numerous years, retiring in 1992, and then worked at Carter Lumber in Clarion to keep busy. Tom enjoyed his daily drives around the backroads and loved spending time with his family, especially his grandkids. He also loved being with his dog, Bailey. Tom is survived by his son, Tracy Rankin of Summerville; his daughter, Tammy Smith and her husband, Brad, of Clarion; his granddaughter, Lauren Smith Ehrhart and her husband, Tom, of Limestone; and his grandson, Tommy Smith of Clarion. He is also survived by the mother of his children, Carol Rosenquest of Summerville; his sister, Judy Dean and her husband, Jerry, of Rimersburg; a sister-in-law, Connie Rankin of Rimersburg; his beloved dog, Bailey; and numerous nieces and nephews. Tom was preceded in death by a son, Thomas Dean Rankin II; his parents; five sisters, Dorethea, Zelda, Shirley, Delores, and Donna; and three brothers, Richard, Jack, and Donald. The family will receive friends from 4 p.m. to 7 p.m. on Tuesday, February 16, 2021 at the Robert V. Burns Funeral Home in Clarion. Funeral services will be held at 11 a.m. in the funeral home on Wednesday, February 17, 2021 with Cecil Craig presiding. Live streaming of the funeral can be viewed via our facebook page at Burns Funeral Homes. In lieu of flowers, memorials or donations can be made in Tom’s name to the Clarion Forest VNA Hospice, 271 Perkins Road, Clarion, PA 16214.

Thomas Dean Rankin, 84, of Clarion, passed away Friday evening, February 12, 2021 at home due to complications from a massive stroke. He was born on October 19, 1936 in Rimersburg; a son of the late Jesse Dale and Stella Mae Wensel Rankin. Tom... View Obituary & Service Information

The family of Thomas D. Rankin created this Life Tributes page to make it easy to share your memories.

Send flowers to the Rankin family.