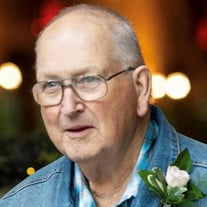 Thomas W. “Tommy Turtle” Vosburg, 80, of Strattanville, went to be with Jesus on Friday, November 26, 2021 at the Allegheny General Hospital in Pittsburgh following injuries he sustained from a fall at home. He was born on February 12, 1941 in Strattanville; son of the late Thomas Lewis and Jessie Virginia Gearlach Vosburg. Tommy served in the United States Air Force during Vietnam where he received the Vietnam Service Medal. He was a mechanic, a body man, and worked several years as a truck driver before becoming disabled. Tommy was a lifelong member of the Clarion VFW Post #2145 and the Strattanville American Legion Post #249. He was also a member of the Piney Rail Riders and Snow Shoe Rails to Trails. He enjoyed spending time fishing at his camp in Canada, trips to the Casino, riding his 4-wheeler, mowing his fields with his Mahindra, and spending time with his family. Tommy is survived by his children, Darlene Bell and her husband, Chris, of Corsica, Marrijane Groves and her husband, Tom, of North Carolina, Dean Vosburg of Strattanville, Amber Hudson and her husband, Warren, of North Carolina, and Jerrod Vosburg and his wife, Cinnamon, of Strattanville; eleven grandchildren; eleven great grandchildren; his sister, Shirley Vosburg of Ohio; and numerous nieces and nephews. In addition to his parents, Tom was preceded in death by his infant brother, Sidney Vosburg, and his infant daughter, Denise Vosburg. Family and friends will be received from 2 p.m. to 4 p.m. on Tuesday, November 30, 2021 at the Robert V. Burns Funeral Home in Clarion with services to follow in the funeral home at 4 p.m. with Rev. Randy Evans presiding.

Thomas W. &#8220;Tommy Turtle&#8221; Vosburg, 80, of Strattanville, went to be with Jesus on Friday, November 26, 2021 at the Allegheny General Hospital in Pittsburgh following injuries he sustained from a fall at home. He was born on February... View Obituary & Service Information

The family of Thomas W. Vosburg created this Life Tributes page to make it easy to share your memories.

Send flowers to the Vosburg family.