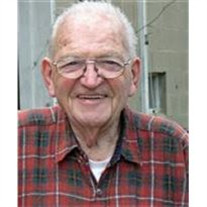 Thomas L. Vosburg, 92, of Strattanville, died Tuesday, October 2, 2012, at the McKinley Health Center in Brookville. Born March 9, 1920 in Duquesne; he was the son of the late A.J. and Elizabeth Wamos Vossburg. Thomas was married on November 16, 1939 to the former Jessie Gearlach, and she preceded him in death on June 26, 2004. A veteran, he served in the U.S. Army Air Force during WWII. Thomas retired from Penn D.O.T. after working 18 years. He was a member of the United Methodist Church in Strattanville. Thomas was also a member of the American Legion Post #0249 of Strattanville and a lifetime member of the VFW #2145 of Clarion.  He also belonged to The Gideons International. He is survived by a son, Thomas W. Vosburg of Strattanville; a daughter, Shirley A. Vosburg of Mentor, OH; a sister, Margaret Hicks of East Brady; a brother, Joseph Vossburg and his wife, Dorothy, of Florida; five grandchildren, Darlene Bell and her husband, Chris, of Corsica, Marrijane Groves and her husband, Tom, of Fayetteville, NC, Dean Vosburg of Strattanville, Amber Hudson and her husband, Warren, of Chinquapin, NC, and Jerrod Vosburg and his wife, Cinnamon, of Strattanville; eleven great grandchildren; and two daughters-in-law, Judi Matthews of Strattanville and Donna Simpson of Corsica. In addition to his parents and wife, he was preceded in death by two brothers, Fredrick Vosburg and William Vosburg; and two sisters, Louise Mangan and Marie Difonso. There will be no visitation. A memorial service will be held at 9 a.m. on Saturday, October 6, 2012, at the Strattanville United Methodist Church with Pastor Nancy Zahn, pastor of the Strattanville United Methodist Church, officiating. Interment will be held in the Strattanville Cemetery.

Thomas L. Vosburg, 92, of Strattanville, died Tuesday, October 2, 2012, at the McKinley Health Center in Brookville. Born March 9, 1920 in Duquesne; he was the son of the late A.J. and Elizabeth Wamos Vossburg. Thomas was married on November... View Obituary & Service Information

The family of Thomas L. Vosburg created this Life Tributes page to make it easy to share your memories.

Send flowers to the Vosburg family.