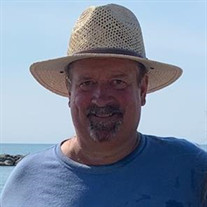 Timothy J. “Tim” Hockman, 57, of Miola, passed away peacefully on Saturday, October 23, 2021 at his home. He was born on October 7, 1964 in Oil City; a son of the late A. Lee and Sarah Baughman Hockman. Tim graduated from Keystone High School in 1982. He married the former Sheila Hall on November 23, 1991, who survives him. They would have celebrated their 30th Anniversary next month. Tim was a self employed contractor of Hockman Construction for 40 years. He was a member of the Immaculate Conception Catholic Church and Knights of Columbus in Clarion. Tim loved to tell jokes and make people laugh. He enjoyed hunting, hosting hunting parties, collecting Case knives, building projects in his garage, and being with his family. Tim was very proud of his daughters and their accomplishments. He is survived by his loving wife, Sheila; two adoring daughters, Phaedra Hockman of Knoxville, Tennessee and Phylicia Hockman of Miola; three sisters, Linda Duffee and her husband, Dave, of Shippenville, Chery Rodgers and her husband, Doug, of Oil City, and Leesa Knight of Shippenville; a brother, Tony Hockman and his wife, Julianna, of Shippenville; and numerous nieces and nephews. Tim was preceded in death by his parents. Family and friends will be received from 4 p.m. to 7 p.m. on Tuesday, October 26, 2021 at the Robert V. Burns Funeral Home in Clarion. A Christian Wake Service will follow at the end of visitation. Mass of Christian Burial will be celebrated at 11 a.m. on Wednesday, October 27, 2021 at the Immaculate Conception Catholic Church with Rev. Monty Sayers presiding. In lieu of flowers, memorials or donations can be made to the Knights of Columbus to honor Tim, 715 East Main Street, Clarion, PA 16214.

The family of Timothy J. Hockman created this Life Tributes page to make it easy to share your memories.

Send flowers to the Hockman family.