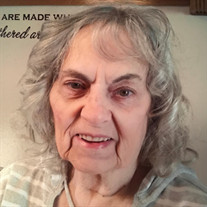 Twila M. Fink, 84, of Strattanville, passed away early Wednesday morning, December 6, 2017 at the Shippenville Healthcare and Rehabilitation Center. She was born on January 15, 1933 in Pine City; daughter of the late Joseph and Gertrude Mahle Rex. Twila married William R. Fink on April 1, 1955, and he survives. She first worked at Owen’s Illinois Glass Plant and retired from Clarion Limestone Area School. Twila enjoyed crocheting and spending time with her grandchildren. She is survived by her husband, one son, Brian Fink and his wife Lori of Strattanville, five grandchildren, Dan Fink and his wife Marie of Emlenton, Jill Spence and her husband Tom of Shippenville, Kyle Fink of Strattanville, Brilyn Fink, and Jennifer Fink both of Pittsburgh, and four great grandchildren, Joseph and Brooklyn Spence and Mason and Logan Fink. Twila is also survived by two brothers, Ray Rex and his wife Mary of Shippenville and Dean Rex and his wife MaryAnn of Texas. She was preceded in death by her parents, two sons, Rodney and William Fink, a daughter-in-law, Kristine Fink, three brothers, Gale, Frank, and Paul Rex, and two sisters, Mae Stover and Doris Rowan. Her Family will receive friends from 10 a.m. to 11 a.m. on Friday, December 8, 2017 at the Robert V. Burns Funeral Home in Clarion with Funeral Services to follow at 11 a.m. in the Funeral Home with Pastor Tom Young of the Williamsburg Community Bible Church. Interment will be held in the Cedarview Memorial Park in Strattanville.

Twila M. Fink, 84, of Strattanville, passed away early Wednesday morning, December 6, 2017 at the Shippenville Healthcare and Rehabilitation Center. She was born on January 15, 1933 in Pine City; daughter of the late Joseph and Gertrude Mahle... View Obituary & Service Information

The family of Twila M. Fink created this Life Tributes page to make it easy to share your memories.

Send flowers to the Fink family.