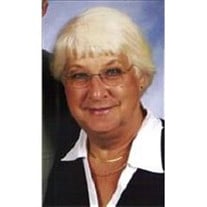 Noni Huefner, 73, of 12631 Route 208 Marble, died unexpectedly on Wednesday, March 18, 2009, at her home. Born March 6, 1936, in Fryburg, she was the daughter of the late Henry and Susan Zacherl Groner. She attended McGinnis, Fryburg Public, and North Clarion High School graduating in 1954. Mrs. Huefner was married at St. Michaels Church in Fryburg on October 12, 1957 to Regis E. Huefner, who survives. They celebrated their 50th Anniversary in the fall of 2007. She was employed for years at the L & R Store in Clarion and Lighting Palace of the Riverhill, where she made a lot of close friends. Later, she joined Chandler Dining as a food handler. She enjoyed her granddaughters, decorating, lawn and gardening, shopping, and helping people. Surviving along with her husband, are two sons, Kurt M. Huefner of Marble and Brad C. Huefner and his wife, Cheryl A. “Cher”, of Leeper; two granddaughters, Shawne Nicole and Braden Suzanne Huefner, both of Leeper. Also surviving are two brothers, Joseph Groner and his wife, Virginia, of Shippenville; Edward Groner and wife, Mary Ann, of Shippenville; and brother-in-law, Clair Bauer of Lake Lucy. She was also survived by several nieces and nephews. In addition to her parents, she was preceded in death by two sisters Sister M. Suzanne, O.S.B and Dorothy Bauer; and two nieces, Jolene Bauer and Kristine Fink. Family will receive friends on Friday from 1:30 to 4 p.m. and 6 to 9 p.m. at the Robert V. Burns Funeral Home in Clarion. Mass of Christian Burial will be celebrated Saturday at 11 a.m. at the Immaculate Conception Church in Clarion with Rev. Monty Sayers presiding. Entombment will follow in the Immaculate Conception Mausoleum. In lieu of flowers, the family requests that memorials be made to Camp Echo in care of Dawn Bressler, 721 Oak Street, Bloomsburg PA 17815.

Noni Huefner, 73, of 12631 Route 208 Marble, died unexpectedly on Wednesday, March 18, 2009, at her home. Born March 6, 1936, in Fryburg, she was the daughter of the late Henry and Susan Zacherl Groner. She attended McGinnis, Fryburg Public,... View Obituary & Service Information

The family of Veronica "Noni" Huefner created this Life Tributes page to make it easy to share your memories.

Send flowers to the Huefner family.