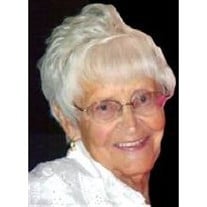 Veronica Frances (Selker) Polatty, 85, of Clarion, was called to be with the Lord, surrounded by her children at 11:00 p.m. on Monday, February 1, 2010, at Clarion Hospital. Born on, September 26, 1924, in Clarion, she was the daughter of Leo and Katherine Hartle Selker. She was a lifelong resident of Clarion. Veronica attended the Immaculate Conception School. She was married on May 18, 1946, in the Immaculate Conception Church, to Dr. Thomas Polatty.  Together, they raised all 11 children. To many in the area, she was known as “the flower lady.”  In addition to her strong love and devotion to her family, her passions in life were flowers and babies.  She had a special gift for both. Veronica was an active member of P.E.A.C.E. She was an avid hunter in her day and a avid Steelers fan.  Her sense of humor and loving nature will be missed. Veronica is survived by all 11 children:  Bo Polatty (Kathy) of Monrovia, MD; Susan Gourley (Ken) of Baton Rouge, LA; Tom Polatty (Joyce) of Pittsburgh; Steven Polatty of Clarion; Mark Polatty (Debbie) of Greenland; Lynn Dudley of Strattanville; Jeanne Shotton (Rod) of Mesa, AZ; Elaine Polatty of Gilbert, AZ; Greg Polatty of Strattanville; Dave Polatty of Shippenville; Karen McMillen (Pat) of Limestone; 13 grandchildren; two great grandchildren; and a number of nieces of nephews. Also surviving are brothers, Raymond Selker and Al Selker (Emma Lou), both of Clarion and many special friends. In addition to her parents and husband, she was preceded in death by brothers, Leo and Bernard Selker; and sister, Helen Rhea. Family will receive friends from 10 to 11 a.m. on Thursday, February 4, 2010, at the Immaculate Conception Church. Mass of Christian Burial be held at 11 a.m. on Thursday, February 4, 2010, at the Immaculate Conception Church with Rev. Monty Sayers, pastor of the Immaculate Conception Church, officiating. Interment will be held in the Immaculate Conception Cemetery. In lieu of flowers, memorial donations may be sent to Clarion Forest VNA Hospice or Clarion Hospital Maternity Unit.

Veronica Frances (Selker) Polatty, 85, of Clarion, was called to be with the Lord, surrounded by her children at 11:00 p.m. on Monday, February 1, 2010, at Clarion Hospital. Born on, September 26, 1924, in Clarion, she was the daughter of... View Obituary & Service Information

The family of Veronica F. Polatty created this Life Tributes page to make it easy to share your memories.

Send flowers to the Polatty family.