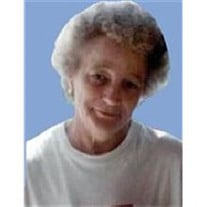 Vesta “Janie” Nick, 66, of Liberty Towers, Clarion, died Monday, November 14, 2011, at her residence. Born May 5, 1945, in Tionesta; she was the daughter of the late Andrew Samuel and Myrtle Avis Bell Blair. Vesta was first married to Gary L. Henry and then married to Cletus E. Nick, who both preceded her in death. She worked for the Owens Brockway Glass Plant in Marienville.  She also worked for many contracting companies and was a bartender.  Vesta was of the Protestant faith. She never knew a stranger because she was a friend to anyone she met. Vesta loved her dog, Dizzy. She is survived by a daughter Debbie Koerbel of Shippenville and her daughter, Brandy Girt and her daughters, Ali and Adylin, of Strattanville, and her son, Bradley Reinsel and his daughter, Grace, of West Virginia; a son, Jake Roger Henry of Kittanning; a son, Richard Nick and his son, Dalton Nick, and two stepsons, Justin Barr and Jessie Montana, of Strattanville; and a son, Brian Nick of Tionesta and his daughter, Kayla Nick  of Saxonburg and her soon to be son, Hunter; her three granddaughters, Amanda Girt and her three sons, Logan, Lincoln, and Lawson of Summerville, Ashley Smith  and her son, Brecken, of Florida, and Abby Smith and two sons, Kai and Kabe, of Florida; and a life-long friend, Judy Deitz of Knox. In addition to her parents and husband, she was preceded in death by a granddaughter, Taylor M. Nick; and three sisters, Lavina E. Clymo, Mary Ruth Best, and Burtha L. Kiser. Family will receive friends from 2 to 4 p.m. and 6 to 8 p.m. on Thursday, November 17, 2011 at the Robert V. Burns Funeral Home, 638 Wood Street, Clarion. Funeral services will be held at 11 a.m. on Friday, November 18, 2011, in the funeral home with Randy Evans, VNA Hospice Chaplain, officiating. Interment will be held in the Clarington Methodist Cemetery. In lieu of flowers, memorials and donations can be made to the American Legion Auxiliary Scholarship Fund, 530 Main Street Clarion PA 16214, or Clarion Food Bank.

The family of Vesta "Janie" Nick created this Life Tributes page to make it easy to share your memories.

Send flowers to the Nick family.