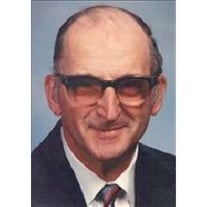 Virgil R. Beary, 90, of Fulton Road, Shippenville, Elk Township, Clarion County, died at 3 p.m. Saturday, Dec. 20, 2008, at his home. Born May 25, 1918, in Clarion County, he was a son of John D. and Theresa Schill Beary. During World War II, Mr. Beary served as a staff sergeant in the U.S. Army in Iceland. He was self-employed at Beary Logging Inc. He was a member of the Immaculate Conception Roman Catholic Church of Clarion. Mr. Beary was also a member of the Knights of Columbus in Clarion. He was a member of the Moose Lodge No. 101 in Clarion, where he served as governor and past governor, and was also a life member of the Legion of the Moose and received the highest degree of Moose, a pilgrim's degree. He was also a member of the Elks Club in Franklin, the American Legion Post No. 066 of Clarion, the Antler Club of Lucinda and was a life member of the National Rifle Association. He enjoyed hunting and camping, and a special trip, a three-month visit to Alaska with his wife. He was married Sept. 20, 1941, to the former Eleanor Fulton, who preceded him in death. Surviving are four children, Eileen Evans and her husband, Oliver, of Kalamazoo, Mich., Janet Williams and her husband, James, of Shippenville, James A. Beary and his wife, Fran, of Knox, and Mary Ann Saltsgiver and her husband, William, of Shippenville. Survivors also include five grandchildren, Rachel Chandler of Pawpaw, Mich., Ethan Evans of Oxford, Miss., Tiffany and Brynn Beary of Knox, and Tyrell Beary of Shippenville; and four great-grandchildren, Evan Chandler of Pawpaw, Mich., Mariah Beary of Knox, Austin Beary of Shippenville and Arianna Beary, also of Shippenville. Also surviving are three brothers, John C. Beary and his wife, Nancy, of Columbiana, Ohio, Lloyd A. "Jake" Beary and his wife, Thetus, of Clarion, and Henry A. Beary and his wife, Rita, of Knox; and two sisters, Donna Girts and her husband, Ron, of Clarion, and Abbie Porterfield and her husband, James, of Dempseytown. In addition to his parents and wife, he was preceded in death by a sister, Ruth Beary; and three brothers, Keith Beary, Lawrence Beary and Dennis Beary. Friends may call from 7 to 9 p.m. today and 2 to 4 and 7 to 9 p.m. Tuesday at the Robert V. Burns Funeral Home of Clarion. A Christian wake service will be held at 8:30 p.m. Tuesday in the funeral home. Mass of Christian Burial will be celebrated at 10 a.m. Wednesday in the Immaculate Conception Church of Clarion with the Rev. Monty Sayers, pastor, presiding. Interment will be in the Immaculate Conception Cemetery. The family suggests memorials be made to the American Chestnut Association, 469 Main St., P.O. Box 4044, Bennington, Vt., 05201, or to the Clarion-Forest VNA, Knox, 16232.

The family of Virgil R Beary created this Life Tributes page to make it easy to share your memories.