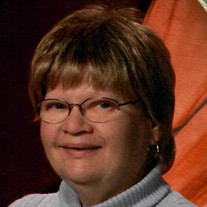 Virginia Kay “Ginny” Hartle, 73, of Corsica, passed away early Thursday morning, September 12, 2019 at the Laurelbrooke Landing in Brookville, where she had resided for the last three and a half years. She was born on March 19, 1946 in Brookville; daughter of the late Joseph and Mary DeMotte McGrane. Ginny graduated from Clarion Limestone High School in 1964. She then received a Business Degree from Dubois Business College. Ginny married A. Paul Hartle on June 21, 1969; whom preceded her in death on March 22, 2009. She worked at Kraus USA in Shippenville for 25+ years, retiring in 2012. Ginny was a member of the Immaculate Conception Catholic Church in Clarion and attended the Pisgah Presbyterian Church in Corsica. She was a member of the American Legion Post #66 of Clarion. Ginny enjoyed camping, sewing, reading, and baking cookies. She loved spending time with her kids and grandkids. Ginny is survived by her three children: Tina Simpson and her husband Gus of Corsica, Brian Hartle and his wife Brandy of Corsica, and Lisa Craig and her husband Matthew of Curllsville; and six grandchildren: Donovan Ganss, Sydney Simpson, Lauren Hartle, Samantha Simpson, Calyssa Hartle, and Stephanie Simpson. She is also survived by her sister: Georgi Fitzgerald and her husband Bob of Brookville; her brother: Mike McGrane and his wife Elizabeth of Georgia; and numerous nieces and nephews. Ginny was preceded in death by her parents and husband. The family will receive friends from 1 p.m. to 4 p.m. on Sunday, September 15, 2019 at the Robert V. Burns Funeral Home in Clarion. Additional viewing will be held from 10 a.m. to 11 a.m. in the funeral home on Monday, September 16, 2019 where funeral services will follow at 11 a.m. Entombment will take place in the Immaculate Conception Catholic Mausoleum.

Virginia Kay &#8220;Ginny&#8221; Hartle, 73, of Corsica, passed away early Thursday morning, September 12, 2019 at the Laurelbrooke Landing in Brookville, where she had resided for the last three and a half years. She was born on March 19,... View Obituary & Service Information

The family of Virginia K. Hartle created this Life Tributes page to make it easy to share your memories.