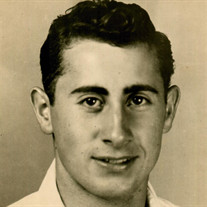 Walter W. “Wally” Bauer, 79, of Lucinda, passed away peacefully on Sunday, December 3, 2017 at home surrounded by his family, following a lengthy bout with Cancer. He was born on August 10, 1938 in Lucinda; son of the late Maurice and Catherine Wolbert Bauer. After graduating from North Clarion High School in 1956, he then went to Barber School in Erie. He was a Veteran of the US Army. Wally owned Wally’s Barber Shop in Lucinda for twenty-five years and later retired from Owen’s Illinois Glass Plant in Clarion. Wally was a member of the Saint Joseph Catholic Church of Lucinda and the Knights of Columbus. He was also a member of the Antler Club of Lucinda and the Fryburg Sportsman’s Club. Wally enjoyed hunting, woodworking, gardening, farming, and his cat, Max. He is survived by a very special friend, Janet Uzmack, three sons, Douglas A. Bauer, Russell J. Bauer and his wife Karen, and M. Francis Bauer all of Lucinda and his grandchildren, Ross, Dakota Lynn, Seth, and Kaden Bauer. Wally is also survived by his siblings, Geraldine Ochs of Lucinda, Estella Lauer and her husband Delmar of Lucinda, Susan Larrow of Clarion, Rita Anderton and her husband Mike of Seneca, and Roger Bauer and his wife Patti of Lucinda, and a number of nieces and nephews. He was preceded in death by his parents, an infant son, Walter M. Bauer, and a sister, Marjorie Carroll. Wally’s family will receive friends from 2 pm. to 4 p.m. and 6 p.m. to 8 p.m. on Tuesday, December 5, 2017 at the Robert V. Burns Funeral Home in Clarion. Mass of Christian Burial will be celebrated at 10 a.m. on Wednesday, December 6, 2017 at the Saint Joseph Catholic Church in Lucinda with Father Joseph R. Czarkowski, pastor presiding. Interment will follow in the Saint Joseph Catholic Cemetery. Memorials or donations can be made in Wally’s name to the Clarion Cancer Center, 1 Hospital Drive, Clarion, PA 16214 or to the Saint Joseph Catholic Church, 112 Rectory Lane, Lucinda, PA 16235.

The family of Walter W. Bauer created this Life Tributes page to make it easy to share your memories.

Send flowers to the Bauer family.